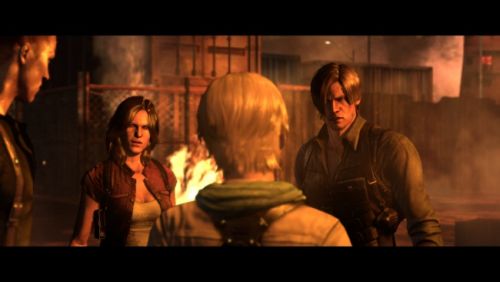 We can’t seem to get enough of Resident Evil 6 right now, especially after our recent, hands-on E3 impressions with its co-op. Two new gameplay videos of heroes Leon Kennedy, Jake, and Sherry have caught our eye, and thus we must share them with all of you.

Now, Capcom has just release some more of the Resident Evil 6 gameplay featured at the Microsoft E3 press conference just last month, depicting pretty-boy Leon Kennedy and new characters, Jake and Sherry. Like the other videos, the first clip shown off here follows closely behind Leon Kennedy, making his way to an extraction point within a currently toppling city. Even though we don’t know what the Japanese commentators are saying during the videos, we don’t necessarily need to. The game already seems quite good from the looks of things:

Over all, each of the three storylines features in the game will equal to “Probably around 70-80% of the volume of the whole game in Resident Evil 5,” stated producer Yoshiaki Hirabayashi. What that other chunk of content might be, we can only guess. But if it’s anything like the videos we see here, we shouldn’t need to worry much.

Resident Evil 6 will be arriving fittingly in stores on October 2nd.