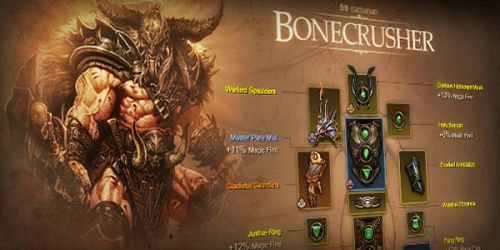 Blizzard has recently announced its launch of the Character Profiles system for Diablo 3. Players are now able access their in-game character’s, including their friends', skills, stats, play time, etc. all with a few clicks of the mouse.

It’s a long day at the office all you can think about is Diablo 3. Wouldn’t it be nice to have an easy way to keep up while not playing? That’s why Blizzard added the new character profiles for easy access to player’s character information out of game. So how can players access these character profiles? Easy: anywhere on the Diablo 3 Community Website (first by logging into your Battle.net account). Once logged in, players can then select their Diablo 3 Battle Tag and then view their chosen character profile. A simple, speedy, and satisfying way to keep tabs on their Diablo 3 lives: What can they view in these profiles? Practically anything a player would want to know when in-game. Their heroes’ stats, skill tree, loot, gear, current game progress, career path, you name it. Players are even able to check out their friend’s characters using their Battle Tag through the Friends Tab and brag how much better they are than everyone at Diablo 3. Friends are able to compare one another’s skill trees, rune choices, and on-hand gear:

How high have you raised your characters’ attributes? What are they wielding in each slot? What are their most prominent gear bonuses? What skills comprise their current build? Nuance awaits you in the Heroes tab.

How many acts have you cleared? What bosses have you shredded in each difficulty? How far have you leveled up your hardcore and normal artisans? Find out in the Career tab. You can also check your play time (by class) throughout your entire Diablo III career, and learn how many monsters and elites you’ve slain.

The Friends tab lets you check out your BattleTag friends’ characters, so that you can quickly compare notes on gear, skill & rune choices, and everything in between. You can also click on a BattleTag in the Diablo III forums to go directly to that player’s profile.

In the near future, Blizzard is planning to have more features and functionality to the Character Profile system, so be sure to keep using it frequently and give Blizzard lots of feedback in return. Hopefully, they will include artisan and achievement stat tabs that Diablo 3 players would most certainly appreciate.