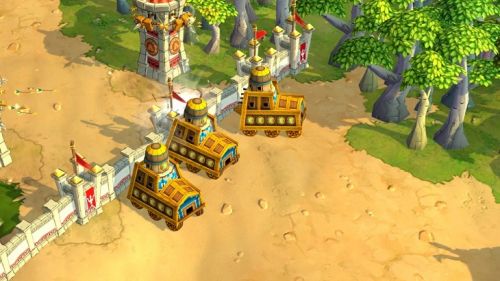 Since its release last year, Age of Empires Online has continued to grow thanks to a steady drip of both free and premium content. Whenever a new premium (paid) empire debuts, Gas Powered Games also rebalances and tweaks the game for all. Such will be the case when the Babylonian Empire and Fertile Crescent Booster Pack (both paid content) debut this week. The Anniversary Update will usher them in, adding new features like the Empire Vault for all players to enjoy.

The Age of Empires Online blog describes the Babylonians as a civilization that can build a strong economy quickly.  Its key units include: the Ox Cart, which act like mobile storehouses, eliminating the need to transport harvested resources to remote storehouses; the Shield Bearer, a defensive unit; the Lancer, an anti-infantry Cavalry unit; and massive Siege Towers (pictured at top) for breaching enemy walls and structures. Babylonians also get three exclusive structures: Ziggurats, Gardens, and Clay Walls.

As for the Fertile Crescent Booster Pack, it includes 30 quests that take place in the eponymous region that stretches from the Mediterranean Sea to the Persian gulf. These quests revolve around several unique scenarios: players will need to stop a median conquerer named Makru from overtaking the region; block Marauder raids along the Tigris and Euphrates Rivers; help quell a rebellion in Parthia; build the Hanging Gardens of Babylon to inspire the land's people; and gather gold in a series of Ox Cart minigame quests. Finally, many quests will provide co-op specific roles for both players!

The Babylonian Civilization and Fertile Crescent Booster Pack are just two components of the massive Anniversary Update. Other new features include:

See the descriptions for these features and the full list of changes at the official blog. The Anniversary Update is scheduled to go live Tuesday, August 14.

Age of Empires Online is a free-to-play online game that supports 2 player online co-op. Check out our co-op review for full details, and then stop by Xbox.com or Steam to download the game.