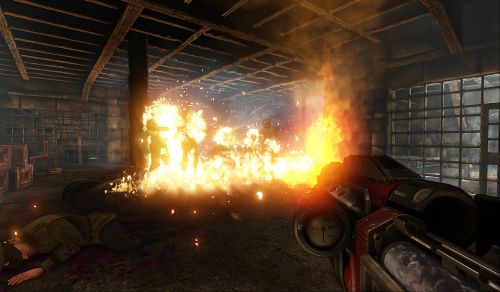 When I first heard that Rise of the Triad was getting a reboot, I instantly thought to myself, "What the hell is a triad?" Fortunately for me, our own intrepid Sam Tyler is quite fond of the game. He reminisced about the bygone era of flannel shirts and grunge music, or whatever they listened to in the UK in 1995. He recently did a small write up for the game's recent announcement trailer, recalling an improvised co-op mode he would play with a pal.

If you don't know what you're getting into, that's okay. I asked Sam to elaborate on the 17-year-old title:

...from the dregs of my memory. Remember this is 15 plus years and a lot of beer later:

The game was an awesome FPS that took the likes of Wolfenstein 3D to another crazy level.  You played as one of five characters and had to take out a series of cultists.  The game is memorable for its awesome weaponry that would often cause the enemies to explode in a fountain of gore.  It also had some simple puzzle elements that included jump pads that flung you across the screen.

I remember it best for the multiplayer mode that was a traditional versus style, but could also be twisted into co-op.  One game mode had you searching the map for symbols to shoot.  We used to spend hours bouncing around the screen looking out for things to shoot - the simple pleasure of youths...

He had me at "fountain of gore."

It seems that Apogee Software and Interceptor Entertainment are teaming up to bring the FPS genre back to its roots. Personally, I'll take anything over another generic modern warfare game. Marketing director Dave Oshry had recently told Joystiq that co-op was one of their most requested features. I wanted to know more about a potential co-op mode. I shot Dave an email and he was kind enough to answer some of the staff's co-op questions:

CO: Will there be a co-op mode, if so will it be included from the start or added at a later date?

DO: If we do co-op it will likely be after the fact.

CO: How many players will be supported by co-op?

CO: I recall Rise of the Triad had a tongue and cheek attitude towards ultraviolence, will this be maintained in the new game?

DO: Yes, the game is an extremely faithful remake of the original.  Always room for a bit of the old ultraviolence.

CO: Level design and game physics have moved on since the Rise was released.  We played the new Duke Nukem, which felt distinctly old fashioned. Have you done anything to modernize these areas to avoid DNFs misteps? How do you plan to strike the balance between nostalgia and modern gaming?

The RoTT team covered this particular question in their recent QuakeCon 2012 Panel. It can pretty much be summed up by this image:

They're going for all the awesome stuff you used to love, plus they want to implement modern devices, like a unique competitive single player scoring system, and putting cameras on heatseekers. It's a pretty in-depth panel. You should probably hit up the link above and check it out. (Warning, excited game developers have been known to use colorful language.)

CO: Will there be gooey eyeballs on the screen?

DO: Yes, eyeballs and more!

CO: What about Drunk Missiles?

DO: Yes, Drunk Missiles and all the other original weapons will return!

CO: If co-op is being added as DLC, does that mean we're going to get a survival-style mode or is there a chance of full on campaign co-op?

DO: We like horde mode, but a competitive campaign co-op based around our scoring system sounds way better.  Complete the campaign while throwing Enforcer Nets at the other members to slow them down?  Ludicrous!

CO: When announced, it was said that co-op was the  number one requested feature for the game.  Was the team surprised by this?  Do you see having co-op as a necessity now as much as having a deathmatch mode was a few years ago?

DO: We were surprised by the requests for co-op.  The necessity all depends on the game.  RoTT 95 never had anything close to co-op, but the more you think about it - the cooler it sounds, right?

CO: I see God Mode, Dog Mode and Bad Trip are all returning - what about Ultraviolence Mode? I need my gibs to be even more ludicrous than ever.

DO: Why RoTT?  Because the gaming world has forgotten what it means to have pure unadulterated ludicrous bloody fun with their first person shooters!  Why now?  Because Interceptor was likely the only team who could faithfully bring back RoTT and do it right.

CO: Watching the video I get a nostalgic Serious Sam vibe. I know you're very familiar with that old school FPS gameplay that hearkens back to the genre's glory days. Serious Sam 3 BFE offers a 16 player co-op campaign, hell, it even offers four player local co-op, which is rare for a PC title. Could Rise of the Triad support such an ambitious co-op mode in the future?

DO: We could support any mode we wanted to.  It's just a matter of time and resources :-)

CO: Thanks for the time, Dave.

Rise of the Triad is expected to launch in late 2012 or early 2013. You can find more information at RiseoftheTriad.net.

*I'm embarrassed to admit that I had to email Dave and find out what "/ekg" meant. Fans of RoTT will know what's up.