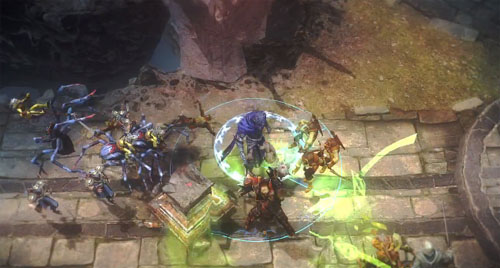 We've been impressed so far by what we've seen from Guardians of Middle-Earth, the upcoming action MOBA for consoles. As some of you may know, one of the biggest draw to these types of games is the different characters and how they vary in playstyle from each other. Monolith is certainly aware of this, as they've been doing a series of videos showcasing heroes, breaking down each of their skills. Gollum, Gandalf, Galadriel, and Uglúk have all been presented in previous such videos.

This week we're given a new video on Legolas and the Witch-king. Both act as types of controllers in the fight, Legolas with his knockback attack and the Witch-king with his hero taunt. Both will surely result in many a death to a tower, making players curse the enemy hero, tower, and themselves for being in that position. Ah, the lovely rage of MOBAs.

Check out the video below to get a more detailed breakdown of these two heroes:

Guardians of Middle-Earth will support 5-player online co-op on XBLA and PSN. Expect it out sometime later this year.