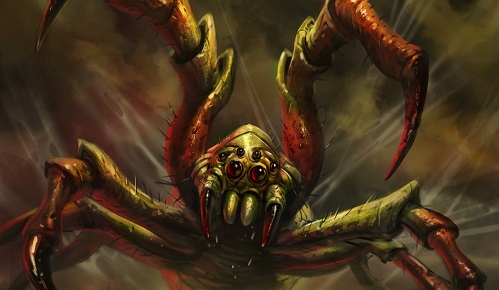 Everyone loves spiders. Especially giant spiders --giant spiders with spiny legs that skitter around on needle-point claws, meticulously working bone-crushing chelicerae framed by sharp, venom-filled fangs, peering into your soul with their glassy, alien stares of desperate hunger. Makes me feel all warm a fuzzy. The makers of Guardians of Middle-Earth are tapping into our universal love of spiders with their new character, Unglob.

Unglob is a giant spider from Mirkwood Forest. She's kind of like Shelob, but different. She's actually aligned with the forces of good in GoME. According to the GoME website, she is a Striker class character whose powers include "Stick," "Drain," "Hunt," and "Bite." Most of her abilities damage enemies, slow them down, or steal their life. You know, spider stuff. See her in action in the video below.