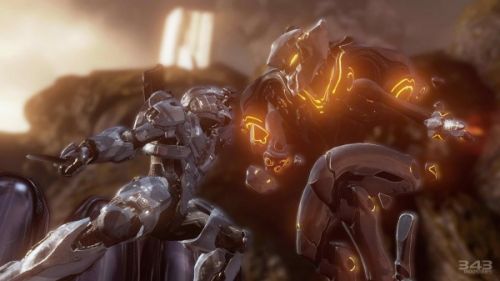 After you cast your vote on November 6th for your respective presidential election candidates, you’ll be all set to go out and purchase Halo 4 with its first Spartan Ops episode ready to go. Spartan Ops, a special co-op mode featured in Halo 4, is one of 10 “episodic missions” that take place directly after the single player campaign.

You watch a part of the episode and then you play the rest of the episode. There isn’t just one mission per episode, but five. Frank O’ Connor, Development Director at 343 has stated, “Each week, we’ll introduce five 10-15 minute missions that continue the story of the UNSC Infinity.” If you want to not spoil anything right away, it might be best to work your way quickly through the single player campaign before tackling the first Spartan Ops mission. The mode is actually a direct sequel to the single player campaign, featuring the return of Master Chief and his AI partner, Cortana. Instead of more gameplay from these two characters, the Spartan Ops missions revolve around 2 new Spartan squads, named Crimson and Magestic. O’ Connor divulged little to not spoil the plot:

The story of the UNSC Infinity intersects with the Halo 4 campaign, but continues on through Spartan Ops after the events of Halo 4. The UNSC Infinity plays an important role in Master Chief’s adventure, and while Spartan Ops is separate from Halo 4’s campaign, don’t be surprised if you periodically cross paths with the Chief. In the first episode, you’re going to find the Covenant is doing an archeological dig and has discovered an ancient artifact. You don’t know what it is, but the Covenant wants it, so that’s good enough for you.

Similar to Halo: Reach, you may choose to personalize your armor from the new armor modifications system, this time featuring gameplay-enhancing customizations. The farther into the campaign you get, the more unlockable armor mods you’ll find to have your Spartan kick massive amounts of tail. Even with all of this armor enhancing capabilities, the Spartan Ops mode is no pushover for those that choose to take on the missions alone. Difficulty will be set above the normal level when playing Spartan Ops, so unless you want a real challenge, bring a buddy along with you. Spartan Ops will support players with a “matchmaking” feature that will, “find you three other players at the same state of the series as you are, so you can play it together and hopefully make some new friends,” states O’ Connor (this means you, all you lone wolves out there); “The gameplay is as long as your friends are cooperating.”

Spartan Ops is completely free with the purchase of Halo 4, but it will require extra space to host the amount of data required to play the full game.