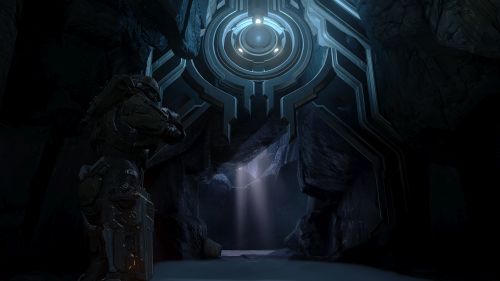 It may be a pretty light fall for big gaming releases, but Microsoft's gigantic franchise is set to get its first true sequel since 2007's Halo 3.  Halo 4 launches on November 6th and if you elect to pick up the title to rejoin Master Chief and Cortana, it sounds like you are in for something wildly different yet familiar all the same.

A variety of previews of the game's campaign have hit the net today, but the preview from Arthur Gies at Polygon seems the most comprehensive.  Like many folks, Arthur wonders whether 343 can pick up the pieces left by Bungie and create a coherent narrative and game that still feels like Halo.  Perhaps the biggest change comes from something so simple - a new enemy race, The Prometheans.

More interestingly, the Promethean forces demonstrate a more interconnected series of strategies and tactics than the Covenant. Knights spawn Watchers, which hover over the battlefield and offer support via shields, healing, and a tractor beam that can catch incoming grenades and toss them back. Crawlers work in packs and attack asymmetrically from walls and will often flank unconventionally.

Flanking isn't new, but the speed and ferocity of the Promethean onslaught makes Covenant attack patterns look almost lumbering in comparison. When all three of the Promethean enemy types I encountered were on screen at once, they coordinated rapidly, and demanded prioritization that inverted the standard Halo loop.

The "Halo Loop" he refers to is that basic combat strategy we've seen over and over again, the 30 seconds of fun that Bungie used to talk about.  But after five Halo games it became predictable.  Adding a new race with completely new combat tactics has mixed things up quite a bit.  And remember, there's still the Covenant to deal with.

Halo 4's campaign will be playable in four player co-op. There was also some hands on time with some new Spartan Ops content, with two new missions on display. In one mission it sounded like there was quite a large battle that involved vehicles and three scarab tanks.  According to the preview it was a bit easy, but adding more players to the mix should make it slightly more challenging.  Another Spartan op dealt with moving a squad through a thin valley under the fire of Covenant snipers.  If anything, it definitely seems like 343 is mixing up the mission variety from what we saw at E3 earlier this year.

With two of the biggest co-op games already behind us, Halo 4 is one of the few remaining titles to look out for this fall.  After previews like this, we're pretty excited to jump back into some co-op, both familiar and new.