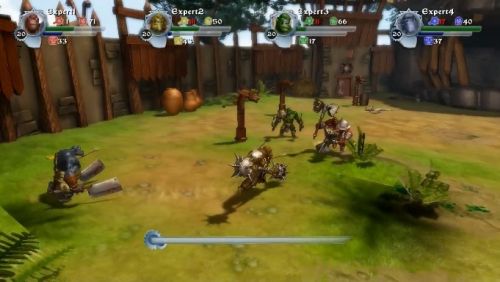 Are you sick of killing Orcs?  Ready to turn the tables on those weak, pathetic humans?  Developer Casual Brothers feels your pain.  Their new game, Orc Attack, lets you play as one of four gastrointestinally-challenged monsters as you seek revenge against the humans who poisoned your food and water supplies. Your corrupted, noxious bodily functions will become tools of mankind's destruction.

In case you were wondering, yes, you burp and fart in your enemy's general direction.  It may sound crass, but with character names like "Lord Poop" and "Doc Turd," I don't think they were going for Orc chic.  After you stun your enemies with an ice burp or double fart; you hack, pound, and slash them to pieces with maces, hammers, cleavers, and axes.  We have a nine minute video and ten screenshots of Orc Attack in action.  The game actually looks very promising once you see it in motion.

Orc Attack has no release date, yet.  We hope to see it by this fall, if not sooner.  It should be available on the XBLA, PSN, PS Vita, and PC.  It supports four player online co-op and four player local co-op.