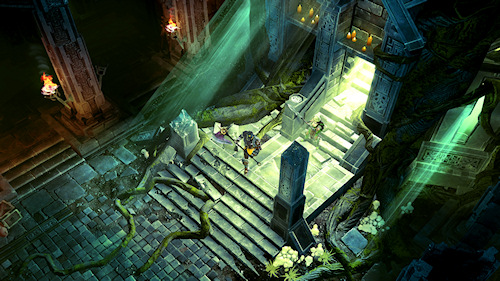 Sacred 2: Fallen Angel was a co-op darling around the Co-Optimus community.  The Action/RPG provided a rich campaign with plenty of character classes, loot, and a variety of massive environments to experience it in.  The game did well critically and most likely financially, so there's no surprise that a sequel is in the works.  We sat in for a live co-op demo of Sacred 3 at PAX this past weekend and came away quite surprised as to where the series appears to be heading.

The first thing that was immediately noticeable for Sacred 3 was the change in graphical style.  While the previous games edged on the over bright, colorful, and almost realistic look; Sacred 3 has a more stylized graphical feel with a tighter camera and bigger character models.  The camera itself is actually dynamic now, several times we saw it pan to the side of our characters to showcase the huge expansive environments which looked absolutely gorgeous. The game was demoed on a PS3, and while we couldn't get our own hands on the controls, it was obvious that combat was a lot more arcade like.  Players racked up combos from attacks earning bonus experience.  Co-Op pairings could earn further bonus XP by comboing enemies together.  There's even co-op finishing moves, called executions, adding another layer to the game's cooperative depth.

We were told that loot would still remain a big part of the game, though we didn't get a good look at exactly how the system would work yet.  What we did see was completely different from past Sacred titles.  Gone is the open world, in its place are individual "missions" with many different objectives.  Once you complete a mission you are scored on your progress.

We were told by the game's rep that they found a large part of the game was spent traveling from quest to quest and they wanted to remove that downtime.  While Sacred 3 will still have towns for re-equipping an gaining quests, you'll never actually venture out from them it seems.  Instead you'll just drop into a mission.  This is a pretty radical departure for the series, one we can't help but feel will upset the fanbase quite a bit.

While it's still pretty early in development I couldn't help but get a "downloadable game" vibe from what we saw.  It was almost like Lara Croft and the Guardian of Light in a lot of ways.  That's probably a good thing.

Sacred 3 is set to release on Xbox 360, PlayStation 3 and PC next year.  Keep an eye on this one for sure - the co-op dynamic is strong, the graphics are beautiful - lets just hope the gameplay can remain deep enough for Action/RPG fans.