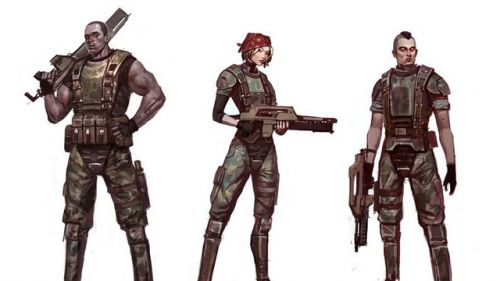 In a move that should come as a surprise to absolutely no one, at PAX 2012 Gearbox announced there will be playable female characters for the cooperative campaign and multiplayer modes in Aliens: Colonial Marines. This stems from an E3 interview with Gearbox's Brian Burleson in which he was asked the question: "Will there be a choice to play as a female Marine?" His response: "No, sorry, no..."

Apparently he meant, and keep in mind, I'm just interpreting body language here; "Of course you'll be able to play as female Marines. What do you think we are? Sexist? We'd be certifiable if we left out female Marines. If we left out female Marines, someone might start up an online petition to include female Marines in the game. People might question the legitimacy of the game's canon if we left out playable female characters. Under no circumstances would we ever leave out playable female characters. They're a staple of the franchise. Ever hear of Vasquez, Dietrich, Ferro, or Ellen F.N. Ripley? If you ask a question like that again I'll bite off a chunk of your face."

But that's not what he said. He said, "No, sorry, no." The story is that Burleson was simply speaking about the E3 demo's lack of playable women, and not the entire game itself. Boy, that would have been easy to clear up with something as simple as say, a Tweet, or an email, or I don't know, do people still use phones? Instead, Gearbox allowed everything hyperlinked in the above fictitious quote to actually happen. (Admittedly, the "sexist" thing was from a Borderlands 2 snafu, but I'm piling on nonsense, now.)

Apparently, they waited until PAX to make the announcement because they wanted to supply some finalized character art. According to Eurogamer:

He (Gearbox CEO Randy Pitchford) went on to explain that Gearbox remained quiet on the issue because it didn't want to show off any character art that wasn't finalised, because that "would become a promise" and lead to disappointment if the character design changed. So Gearbox decided to wait until PAX - the most recent trade show it's attended since the hulabaloo - to show off its female characters.

Check it out at the top of the page. You look at it! Look at it in all of its finalized conceptual glory! 3890 people took the time to sign an online petition to get that sketch! Isn't it beautiful?! I'll tell you this right now, if those characters aren't represented in promised detail down to the pixel, I'll write another article where I bitch about nothing, just like this one.

Of course, this whole thing could have been avoided with a simple statement, something like, "I want everybody to be clear that there are playable females in both the mulitplayer and the campaign," which is exactly what Randy Pitchford said. At PAX. Three months later.

FYI the three players at the top of the page are the other co-op characters. Introducing Pvt. Demarcus Short, Pvt. Jennifer Redding, and Pvt . Guillermo Quintaro. They'll be aiding Cpl. Christopher Winters in the co-op campaign. I know this information just raises more questions, like who are the other three characters on the cover of the game? Probably NPCs. I guess we'll have to wait to find out.

Here's a trailer for a new 4v4 multiplayer mode "Escape," to reward you for reading this article. It's Left 4 Dead-tastic! Enjoy!