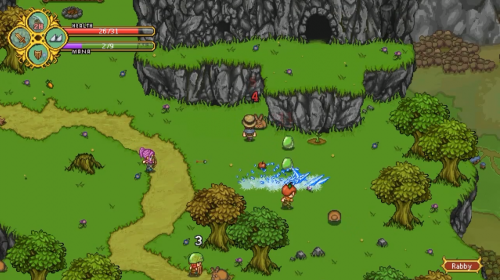 Remember the old-school days where Action RPG’s ruled the gaming world? Well this game aims to bring that back with some modern day swag. Indie developer Pixel Ferret’s new title, Secrets of Grindea, looks to make a name for itself in the gaming scene through Steam Greenlight and Desura PC platforms.

First and foremost, what exactly is Secrets of Grindea about? Well, it’s almost a perfect parody of common Action RPG games we knew and loved as kids. From watching the video below, it looks like a decent combination of elements between Harvest Moon (due to resource gathering and farming) and Secret of Mana (as it was inspired from):

In the world of Grindea everything is determined by one thing–how big your collection of stuff is. You take on the role as a young hero (or heroine) taking his or her first steps to become a famed Collector and help collect the most valuable rares in the entire kingdom. But is everything really as it seems? The hunt for rares soon turns into something bigger, a scenario where family, friendship and possibly the fate of the world rests in your hands.

Using the technologies we have today, Pixel Ferret’s Secrets of Grindea wants to take the genre and to the next generation of gamers. Among a 4-player online co-op mode that is the game's primary feature, this game will also include PVP multiplayer and single player modes, all supported with a fantastically polished combat system and perfect retro-style graphics to boot. Here are some more key features of Secrets of Grindea that immediately caught our attention:

- Character customization. Advanced skill trees give you precise control over how your character develops. There are no caps or specific classes, so the possibilities are endless. On top of this, there’s a wide variety of haircuts, hats and head gears that will make your character look unique as well.

- Co-op support for up to four players! Bring your friends on the adventure, challenge them to any of the mini games in the arena or why not have them help you out in a difficult dungeon?

- Deep combat system inspired by Zelda and Secret of Mana, but supercharged with modern ideas.

- A lengthy and dramatic storyline will take you through dungeons and fields of all shapes in the rich and varied world of Grindea. Countless of side quests and hidden content will keep you busy for hours after finishing the game.

- Hundreds of items to hunt, craft, fish or dig up in order to improve your character, fill the codex and gain fame.

- A pet system that makes sure you never have to be alone, even when playing by yourself. Catch any of the cute tameable animals and have them accompany you on your adventures while also boosting your skills!

- High scores and achievements will soon make your friends turn green with envy.

Since the game needs all the support it can get to get off the ground on Greenlight and Desura, we encourage any and all co-op gamers and fans to help get a great looking game the buzz it needs! In a very short while, the beta for Secrets of Grindea will be announced on Desura very soon, so make sure to keep up with the PixelFerret’s developer blog daily. See if you can help them make this budding co-op gem a reality!