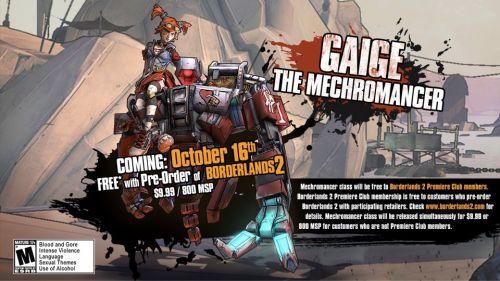 Gaige the Mechromancer will be available for download on October 16th, four weeks after Borderlands 2 hits store shelves. So that means hardcore Vault Hunters will have one week with each of the four classes before Gearbox gives them a new toy to play with. Most of the Mechromancer's skill sets are still under wraps, but we do know she can summon a robot designated D374-TP, better known as "DeathTrap," to do her bidding.

The Mechromancer class will be available for free to everyone who pre-orders Borderlands 2. The simple act of preordering the game will allow you access to the Premiere Club, which has all sorts of extra content. We have previously covered the multiple BL2 preorder bonuses and collector's additions here. If you don't pre-order the game you'll have to fork over $10 or 800 MSP for the new class.