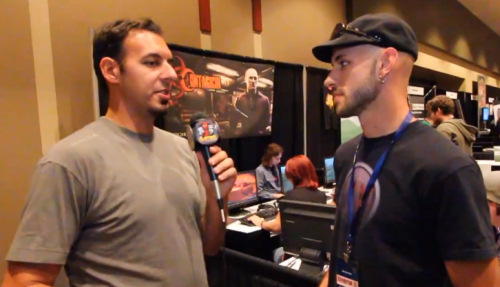 Left 4 Dead popularized the co-op action zombie game genre for sure, but the series certainly isn't the only game in town.  Killing Floor started as a Half-Life mod and moved into full blown territory shortly after and Contagion looks to do the same having come from the creator of the Half-Life 2 mod called Zombie Panic: Source.   We went hands on with the game at PAX Prime 2012 and came away impressed with some truly unique gameplay elements.

The biggest draw of Contagion is every level is somewhat randomized.  Our mission took place in a suburban town filled with houses.  We'd start off by checking our phone for a survivor on the GPS, which would be placed at a random location.  Players need to cooperate and work their way to a survivor's house, get inside, barricade it up, and then survive and onslaught of zombies.  Once the dust settles you'll need to escort the survivor out to a rescue chopper.  These three distinct sections are all randomized so no level is ever the same. Weapons and ammo were limited and players definitely need to watch each other's backs.  If a player did die, instead of being locked in a closet they'd jump over to the other team and play as a zombie - not very co-op, but better than sitting and twiddling your thumbs.

The game still isn't even in alpha yet, and it definitely shows.  The graphics and animations are a bit rough at times, but serve their purpose.  With plenty of time till the game is actually released we expect this one to polish up nicely.  Monochrome LLC plans to release the game on Steam sometime next year.