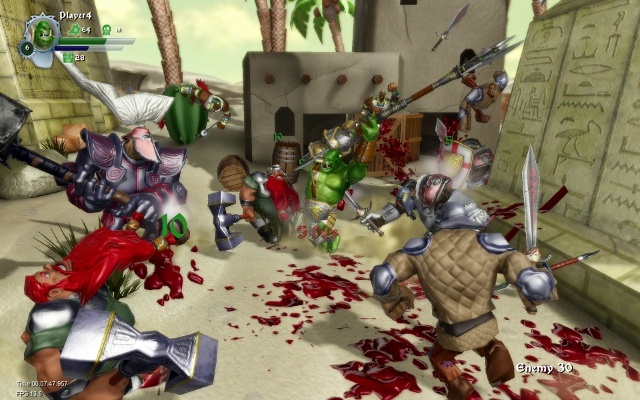 Since its announcement back in January, Orc Attack has looked like a solid fantasy-based multiplayer beat-em-up with a side of humor thrown in for good measure. That humor didn't sit well with everyone, however. Previous videos depict the 4 protagonist orc characters constantly farting at enemies, complete with the disgusting sound effects that entails. I was a tad grossed out, despite developer Casual Brothers' strange and silly defense of the game's flatulence. Thankfully they've finally bowed to player requests (but shouldn't artists ignore feedback? nyuk nyuk) and will allow players to switch the gas attacks to magic ones. Color me excited for the game now!

As you can see - or rather: hear - characters still have area-of-effect gaseous attacks in Magic Mode. It just switches out the armpit-squishing sound effects with standard explosion sounds, which is good enough for me.

Now everyone can enjoy Orc Attack, whether or not they like potty humor. It's a fair and easy concession which will probably help the game go over much better in the long run.

Last week we mentioned that the PC version of Orc Attack will only come to Steam if it receives enough votes on Steam greenlight. As a reminder, the game still needs more votes in order to gain approval. Voting for Orc Attack doesn't mean you'll buy the Steam version, just that you want it to come to the Steam service. Why not hop over to the Greenlight page and give it a vote?

Orc Attack is targetted for a late fall release on XBLA, PSN, and PC. It will support four player co-op both locally and online, plus lots of head-bashing fun.