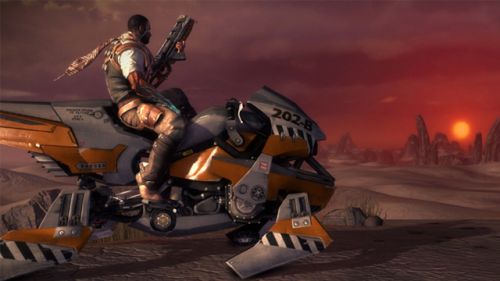 Starhawk, the "build and battle" third-person shooter, is about to become much more accessible. The space western will be available for digital download on the PSN tomorrow. There will even be three ways to buy the game: The full title can be purchased for $39.99, the multiplayer portion of the game is priced at $19.99, and PlayStation Plus Members will be able to download the single player campaign for free.

If you have PlayStation Plus, and you haven't played the game, do yourself a favor and download that sucker. The campaign is basically a five to seven hour tutorial of the multiplayer component, but for the low, low, price of el zilcho, it's definitely worth checking out.

Starhawk's cooperative survival mode, "Prospector," was a decent continuation of the core gameplay. Unfortunately, it had several flaws. One of the most glaring was the lack of a matchmaking system. There was no way to create or even join a public game. This would leave a player fighting solo if none of their friends were playing the game. It was also hella hard.  A new patch that remedies these (and a few other issues) should go live tomorrow. It will include several fixes to both multiplayer and co-op play.

Hey, that's awesome! In our Starhawk Co-Op Review I said I'd reevaluate the score if Light Box implemented co-op lobbies. I'll jump on and test them out later this week. Promise!