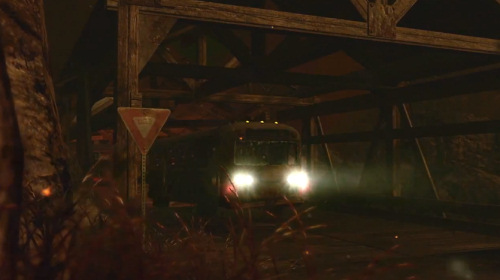 The first official trailer for Call of Duty: Blacks Ops 2's zombie mode is here, not to be confused with the first official teaser trailer.  The heavy metal filled video unveils some key details about the mode which is rumored to be a meaty campaign all on its own.  If the video is any indication, we're in for a wild ride.  (bad pun alert)

Four player co-op is present as the crew of unknowns jump on a bus and travel from town to town eliminating the zombie menace.  It's just like the Antiques Road Show, except with a lot more violence.  There's at least a half dozen stops on the tour as well with a variety of environments on display including some filled with lava.  I'm sure that will end well for everyone.

The mode itself is actually an open world, where players can explore and use the bus for transportation between stops.  While the bus provides some protection during travel, the enclosed space should make for some interesting defensive tactics.  As we see in the video, players aren't entirely safe on the bus.

While we haven't seen any exploding monkeys yet, we do get a glimpse at some possible unconventional weaponry.  In fact, according to the Polygon preview of the mode, there will actually be player built weapons available in the game mode.

Finally it's been revealed there is also a full fledged versus mode for 4 vs 4 action thats only available in the zombie setting.  More details on the co-op mode and Black Ops 2 are coming next week.

Here's the trailer, let us know what you think.

Call of Duty: Black Ops 2 is out on November 13th for the 360, PS3, PC, and on November 18th for the Nintendo Wii U. If you pick up the Hardened or Care Package Edition of the game you'll get a free zombified version of the popular Nuketown map.