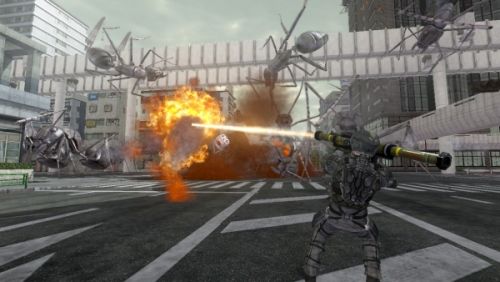 It's a good day to be a bug hunter. Today we have a dozen new screens from Earth Defense Forces 4. It's being developed by Sandlot, the same crew who handled the delightfully campy local co-op title, Earth Defense Force 2017. We recently posted a trailer for the alien blaster here. Watch it. It's awesome.

I wouldn't be surprised if EDF 4 is renamed "Earth Defense Force 2025," if and when it sees a western release. The trailer mentions 2025 at the five second mark. EDF 2017 was actually the third game in the series, but the first one released in the States, hence the name change.

Online co-op has been all but confirmed. As soon as we get some concrete details on the player count we'll add it to the database. For now, you can view the screenshots in the gallery at the bottom of the page. Earth Defense Forces 4 is being developed for the Xbox 360 and PlayStation 3. It is expected to launch in Japan next year.

In other EDF news, series publisher D3 also announced that Earth Defense Forces 3 Portable will be coming to PlayStation Vitas in the US. They dropped a amazingly kick-ass launch trailer yesterday. This is basically a port of EDF 2017, but now it includes four player online co-op and a new flying character. In the announcement tweet they actually refer to the game as "Earth Defense Force 2017 Portable," which makes sense: So to sum up, in case you are confused, the screenshots below are for Earth Defense Forces 4, an Xbox 360 and PlayStation 3 title that is expected to be out in Japan some time in 2013. It will most likely come Stateside soon after. Local and online co-op are expected, but there is not a definite player count.

Earth Defense Forces 3: Portable is a PlayStation Vita title that launched in Japan yesterday. It has been confirmed for the US. It will be called Earth Defense Force 2017 Portable over here. It supports four player online co-op.

There. Clear as bug guts.