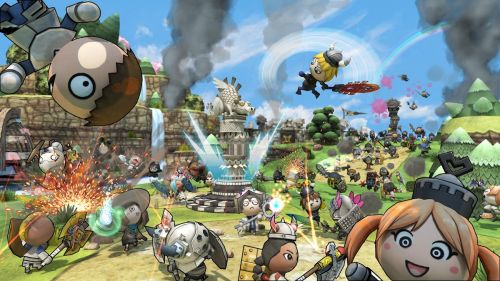 Ever since Microsoft announced Happy Wars would be a free-to-play game, quite a few Xbox 360 players have been anxiously awaiting its release. Sure, the beta has been open for a while, but what about people who couldn't make it in? Thankfully the game has an official release date at last, and it's not far off. Happy Wars will be available to all Xbox Live Gold members on Friday, October 12.

You’ll be able to choose from three classes: Warrior, Mage, and Cleric. The Warrior is a tank who carries sword and shield. Mages are ranged characters, and Clerics run support with healing magic. Each character has a multitude of unique skills, which you can read about at the Happy Wars website. Don’t worry about confusing your character with other team members of the same class. Every time you finish an online match, you’ll earn an equippable item, so everybody should look different from each other. On top of hundreds of free items, there will also be optional premium equipment to buy with Microsoft Points. Free and premium items alike have both cosmetic and functional effects.

The battles in Happy Wars would be epic enough with 30 players hacking and slashing at each other. Team Skills make them even grander. When members of a team group up, they’ll be able to launch meteors and tornados against their opponents. Other tools like Ballistas, Cannons, and Battering Rams will make battles interesting as well.

Happy Wars will be free to all Xbox Live Gold members when it goes live on October 12. Given the low cost of entry, we can expect a huge online community to follow. Just about everyone from Co-Optimus will be playing, so be sure to join us in battle!