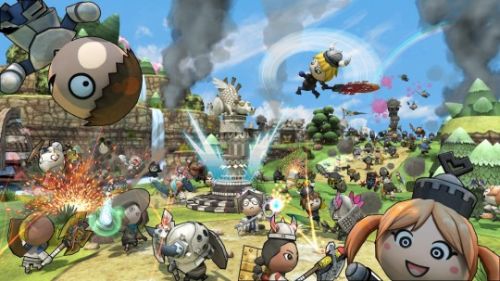 Now’s the time to take another crack at ToyLogic’s Happy Wars on XBLA, as the game recently received a hefty and much needed update. It’s free after all, so why the heck not?

Minor tweeks have been implemented just last week, but this has got to be this biggest patch to date for free-to-play Happy Wars. Some of the major components to this update include an improved matchmaking, in-game interface, and overall gameplay experience, as well as new modes, challenges, and maps to battle over! Read on to find out exactly what ToyLogic changed before booting up the game once again:

- Method for determining a host during host migration (and matchmaking) that can connect to everyone     has improved.
- Matchmaking systems have been adjusted to create more balanced teams.
- Matchmaking using Tags has been removed.
- In-game lag is now less frequent, making matchmaking much faster.
- When a game has been interrupted due to a network error, the count for Happy Tickets and Stars on hand will be reverted to the count at the start of the game. For intentional withdrawls from matches or exits, whatever has been consumed will be reflected. Players no longer penalized for aborting games due to a network error.
- The minimum number of players required for multiplayer sessions are as follows:
Quick Match: 10
Co-op: 4
Player Match: 2
Special Challenge: 12

-  Fixed a bug where a lightning shot would pass through to the other side of the castle gate.
-  AI characters can now use combos with normal attacks all the way to the end of a game.
-  Revised the reward items for campaigns 4-2 (War of the Worlds!) and 6-2 (Final Battle!)
Menus / User Interface.
-  Display version information in lower right corner of the controls explanation screen in Help & Options.
-  Fixed bug where the Result screen would be displayed even though the game has not been played (caused by an error during loading a new game).
-  When a player is dead, he/she can now view the name and image of the character who killed him/her. The deceased player can also view the equipment of the killer character on the same screen.
-  Sorting Item Level-Up and Item Modification by class has been implemented (premium items are given priority on the screen).
-  Amount of Happy Stars is now displayed on the Item Equip screen.
-  A signboard has been added to the play menu. The play menu signboard shows the number of Happy Tickets and Happy Stars the player owns.


-  Fixed the “Join Team Skill” text being displayed in the empty area after the skill was cancelled.
-  Team Skill cancelling is now done by pressing B.
-  Fixed issue of multiple players taking the same Team Skill spot.
-  Fixed issue that “Transport” could be cancelled by using the Y button.
-  Fixed the issue that enemy characters could get damaged from the “Lightning Arrows” skills that was activated from the opposite side of the castle gate.
-  Scores awarded from activating a team skills has been lowered slightly.
-  Fixed issues where a team skill would not launch correctly during participation.
-  Prevention of entering Snowman state when being lifted by a Tornado.
-  Prevention of turning into a Flower state by Happy Miracle when being lifted by a Tornado.
-  Fixed issue of damage being incurred by an ice shot on the other side of a castle wall
Items/ Happy Cards and Stars.
-  3 new Happy Ticket types have been added.
-  13 new buffs have been added.
-  The number of Happy Ticket bundles has increased from 3 to 6.
-  New buffs have been added.
-  It is now possible to exchange unwanted items for Happy Stars at the Item Equipment screen.
-  When running out of space in the inventory, a message will appear letting the player know as well as not allowing the player to obtain more items from the Shop, Spinner, and Cards until space has been made in their inventory.

-  Character now perform dance motions while idle. Dance motions are only applied to characters who are equipped with items who have buffs.
-  Users who exited and re-started Happy Wars due to matchmaking delay or any other error may have been penalized in League Points. This has been resolved.
-  Consecutive Login Bonus has been added. Access to a Treasure Map screen has been added to the Main Menu, allowing players to receive Happy Stars or an item once a day. The player can receive a premium item on the 7th and 14th days and a super premium item on the 21st day. On any other day, the player can receive Happy Stars. The progression is reset at the first of each month.
-  Friend Bonus has been added. Playing the multiplayer mode with friends increases the Happy Star amount on the result screen based on the number of friends.
-  Spawn Stronger no longer has a time limit. The effects now last until the end of the game.
-  The Item Equipment screen now shows the total number of items owned by the player and the maximum number the player can hold.
-  Friendly AI characters now equip different items depending on the strength of the enemy team.
-  2 new in-game music tracks have been added.
-  3 new in-game sound effects have been added.
-  Experience earned is now shown after the player reaches level 5.
-  Respawning by selecting Respawn from the in-game Pause menu now takes the same amount of time, every time.

Those were the main gameplay changes made. The rest of the items listed below are additional modes, features, and aesthetics to enhance the overall appeal of Happy Wars (it’s hard to believe that this game is completely free).

A special challenge Co-Op mode that has two difficulty types: Easy Mode, in which anyone can participate and Challenging Mode, in which only players above a certain rank level who have already completed the Easy Mode can participate. In Easy Mode, common items are available but in Challenging Mode, players can obtain premium items. Limited items can be obtained at a certain probability or when the player achieves MVP status in a match. Even if the player can’t achieve MVP, you can upgrade the reward using Happy Tickets. A new Spawn Stronger effect has been added for the Challenge as well:

Prior the first update, matchmaking was not functions as well as we’d hoped, resulting in unbalanced teams and uneven matches. This allowed some players to receive large amounts of League points, regardless of their personal abilities and by joining a good team against a weak team. Often, we noticed that some players in the top League (Immortal for example) often signed out or “Dashboarded” because they did not want to lose points. From this, we have updated matchmaking (to improve balance and even matches) and by resetting League points monthly, it will accurately reflect the skills of the each player. Please note that this does not change the actual Score Leaderboard, but only in League. With that, only players with Rank 31 and above will be affected with this change. We know some of you might be a bit unhappy with this change, but please note that we can always change this in the future and make any additions, tweaks, or removal if needed. Also, users who exited and re-started Happy Wars due to matchmaking delay or any other error may have been penalized in League Points. This has now been resolved.

-  For a limited time, the maps, placed weapons, and certain skills will be decorated with seasonal accessories. Many different themes are planned, including Christmas.

-  Players earn treasure every day. Tackling the treasure map many times in a month grants special rewards like premium items. Progress on the Treasure Map is reset every month.

Again, this update for Happy Wars is totally free, same as the entire game. Tell us what you think of the new additions in the comments section below!