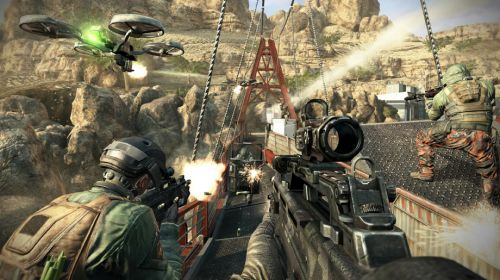 Another year, another Call of Duty. CoD: Black Ops 2 will be out in a little under a month. Chances are you or someone you know will be picking it up. The new trailer looks like a Michael Bay movie, and that's not a bad thing for a video game. I just wish they'd go ahead and give this sucker a two to four player cooperative campaign. Why? Because I think it would be neat. But I don't want to tell Activision their business. They seem to be able to move product just fine.

Ok, I've watched this trailer a few times now. At first I was like "meh," then I was all "props for AC/DC." Now I'm about  seventeen seconds into my third viewing and I'm thinking "maybe." Let's watch some more.

Cool spider thing. Are they falling through a gaggle of planes? Robots jets somersault. Quotes and invisible dudes. Free fall. Stop the music. Continue with the explosions. Was that a horse? Did I just preorder this game so I could get the "Nuketown 2025 bonus map and  access to the double XP launch weekend?"

Holy crap. Did I just get incepted?

Call of Duty: Black Ops 2 will support two payer local co-op and four player online co-op in the accompanying "Zombies" mode. It's usually a really solid co-op experience, and incidentally doesn't appear in this launch trailer at all. Bummer. There will also be a Combat Training mode. This will allow for six player bot-stomping co-op.

Call of Duty: Black Ops 2 will launch on November 13th for the Xbox 360, PlayStation 3, and PC. It will release for the Wii U on November 18th.