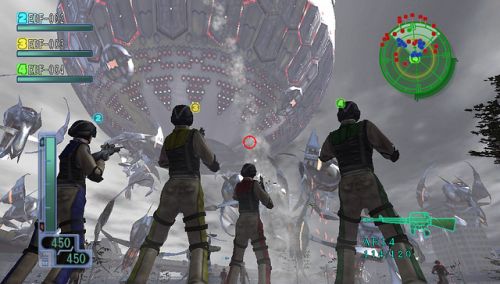 Earth Defense Forces 3: Portable is coming to the United States as Earth Defense Force 2017: Portable for the PlayStation Vita.  The four player co-op game is a remake of the original PlayStation and Xbox game.  Several features have been added for the release including much lauded four player online co-op, something that was limited to split screen co-op in the original.  Obviously, split screen doesn't fly on a 6 inch portable screen.

In addition, new content has been added with a new character, Pale Wing, being included.  She was previouly added to the series in the 2nd and 3rd games.

You can also unlock Pale Wing, the flying female playable character, after certain conditions are met. Pale Wing did not exist in the world of EDF2017, but she came flying from EDF2 into EDF3 Portable to help the troops out against the new threat. This character requires you to play the game differently, with her flying ability and new gear, so be prepared! Pale Wing has her own set of gear, such as the rapier and laser rifle, adding even more variation to the game’s 150+ weapons. You can even have all four players play as Pale Wing in multiplayer to create a complete Pale Wing Unit.

There's no word on release date or pricing for the game.  We'll just have to use the Japanese trailer for the game to hold us over.