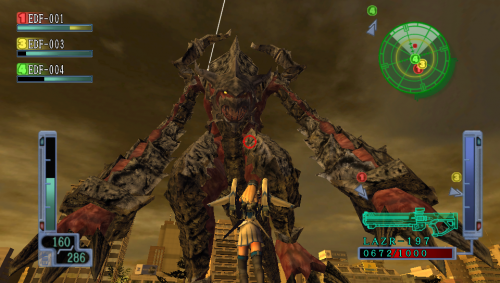 Earth Defense Force 2017 Portable will be out early next year. How early? How about January 8th, which is just in time to catch the trade-in rush from all those single playthrough games you got for Christmas. This announcement literally doubles our title count for co-op games coming out in January. Hopefully some more games pop up, or it's going to be a long a winter.

EDF 2017 Portable is a remastered PlayStation Vita version of the campy classic, Earth Defense Force 2017. It will feature seven new levels and it also includes the Pale Wing, a jetpacking lady soldier. The game also supports four player online co-op, an improvement over the two player split screen action from the original. You can see a Japanese announcement trailer and some fresh new screen after the break.

Earth Defense Force 2017 Portable supports four player online co-op. It will be available for download on the PlayStation Network for $39.99 on January 8.