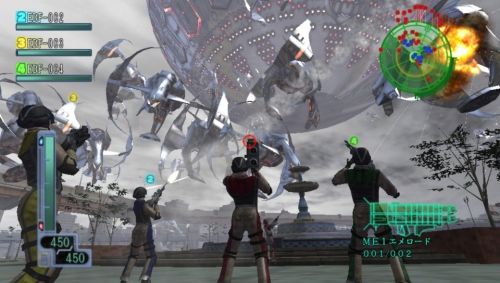 Earth Defense Force 2017 Portable is available now on the PlayStation Vita via the PlayStation Store. If you're not familiar with the series, I'll sum it up for you: You play as Storm 1, part of the Earth Defense Force. You forcibly defend the Earth from alien attacks. These aliens, called Ravagers, come in the form of giant bugs, hulking robots and menacing drop ships. You control a little dude with strangely animated hips and blast the bugs while gathering better weapons and armor. As an added bonus, the buildings which make up the cities you're supposed to be defending will crumble if you so much as look at them funny. There is no penalty for knocking over a skyscraper for the sake of a good explosion. It's simple, fun, and addictive.

Even if you're familiar with the awesome Xbox 360 classic, you should really consider this new handheld version. More than a simple port, EDF 2017 Portable features new weapons, new missions, new enemies, and a new playable character (at least new in 2017); the jetpacking Pale Wing. The Vita title also has four player online co-op.

We have a new launch trailer for you today. Honestly, it's kind of tame compared to some of the other great videos developer Sandlot and publisher D3 have put out for the game. Seriously. Follow the link. They are amazing. If you're really good I'll post the best one after this launch trailer.

Ok, it looks fun. But it doesn't look crap-your-pants fun.

As an added bonus, if you pick up EDF 2017 Portable before February 4 you'll get free access to four downloadable special weapons:

Electro Paralyzer
A top-secret superweapon developed by the EDF, whose flare shells halt the target’s actions. The technology behind it is shrouded in mystery. Some say it was developed by a military genius, or its secrets gleaned from a downed Ravager scout. Extend its effects by hitting the target repeatedly.

Heat Blaster
A short-range laser gun, whose mighty firepower compensates for its limited range. It requires heavy equipment to recharge, making it impossible to reload on the battlefield. Pull the trigger to release all of its energy, or it can keep firing until you switch weapons.

Limit Booster
A data transmitter that sends a special program to vehicles in the vicinity (helicopters, bikes, Vegaltas), shutting down their safety overrides and unlocking their maximum capabilities. Multiple uses won’t increase the upgrade ratio, but will make the effects last longer.

Reverse Drone
An unmanned drone with a nanomachine capsule payload. It flies straight ahead to the nearest ally, and once it connects, it disperses the nanomachines to heal the target. Adjust the direction of fire to select your target.

Nice. They don't look as devastating as the Genocide Gun, but then, what is?

Have you done your good deed for the day? You have? Good. Enjoy the live action wonder of this EDF 2017 Portable commercial from Japan.

Now that's what I'm talking about. Suck it, Pacific Rim.