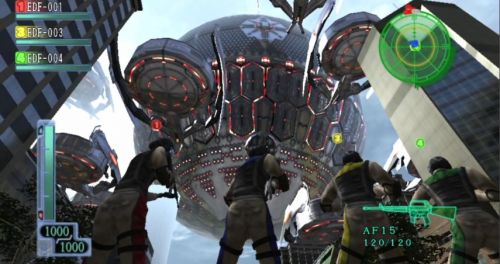 I'm a big fan of the EDF frachise. The "so-bad-they're-good" titles have captivated me since Earth Defense Force 2017. I love taking on the alien Ravagers, easily mangling giant insects, crippling robot Hectors, and menacing drop ships. The sequel, EDF: Insect Armageddon, was a fair game, but lacked the unpolished charm (and the 52 stages with multiple difficulty levels) of 2017.

PS Vita owners will be delighted to know that Earth Defense Forces 3: Portable is launching next month in Japan. (Yeah, this time the "force" is plural. Go figure.)  It's not a new game, but a port of the superior EDF 2017, with some added extra  co-op love. The title will support four player online co-op, and huge upgrade from the two player local co-op that was available on the console version. Check out the video and bask in the glory of low polygon count models, weird swivel hips, and the panicked screams of a million Japanese citizens:

Yes. Yes to all of this.

Oh yeah, it's all in Japanese. Let me translate:

The odds may seem stacked against Earth's protectors, but trust me, they can handle it. The 150-plus weapon drops will help you take down any foe. I don't care how much of a Godzilla rip-off it is.

Why are the flying ladies wearing skirts? Because Japan, that's why.

The Pale Wing from the Japanese-only EDF 2 will be back in action. You'll be able to take to the skies and rain death and destruction down on your enemies. The sky soldier will get more than 150 of her own weapon drops. This pleases me.

Did I say weapons? You bet I did. According to Famitsu (if Google translate is to be trusted), there will be new co-op weapons, new healing weapons, repair weapons, and all sorts of extra-powerful weapons. The super guns will cause massive damage and require your character to wear a back pack, slowing down movement.

Earth Defense Forces 3: Portable looks like a badass remake of EDF 2017 for gamers on the go. (Or gamers on the couch who have to sit through The Bachelor.) The only downside is that the game has not been announced for a U.S. release. Maybe the publisher, D3, doesn't want it to get lost in the flood of all the other PS Vita games...