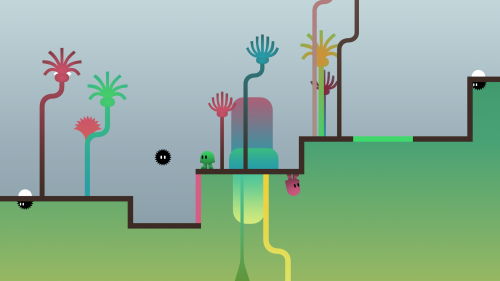 Some of you may remember an indie co-op game called ibb and obb that we mentioned way back on our "Co-Op Games of 2012 Preview" episode of the Co-Opticast. The premise of the game (based on what we've seen so far) is fairly simple: two creatures (the titual ibb and obb) attempt to traverse a landscape that is mirrored across a horizontal plane. Traversing this landscape entails working together and using the inescapable affects of gravity to reach higher ledgers, soar past enemies, and generally pull of some pretty cool jumps.

It has been some time, however, since we heard from Sparpweed, the game's developers, about their plans to get the game to market. There were some rumors that the game was pretty close to finished and a 2012 release date would be likely. Then, Sparpweed announced something that even we didn't see coming - ibb and obb is being delayed so that online co-op can be added to the PSN version of the game!

While this does mean that the game will now see a 2013 release, it's good that they're taking the time to address an issue that could come to haunt them down the line. It's also a bit of a calculated move on their part. How many games are you playing right now? How many are set to release in the next couple months that you can't wait to play? Think a little downloadable title like this will find its way into your play schedule amongst all that? Indie games are increasingly becoming more and more a part of the overall games marketplace, yet their sales still don't match up against many of the AAA titles out there. To that end an indie developer needs to be even more conscious of a good time for his or her game to hit the digital store shelves and waiting until the excitement of the fall release has died down some sounds as good a plan as any.

The full details of the delay can be found below:

We have decided to postpone ibb and obb’s release. “But why, wasn’t the game almost done?”

It is actually almost done, but looking at our current schedule we’d be able to release in November or December. Many people have warned us about releasing in these months, because the marketplace tends to fill up with many big releases. We have a very limited (non existent) marketing budget and it would be hard for us to get noticed this time of year.

Another thing people have been sceptical about is releasing the game without online multiplayer. Even though we strongly feel that playing together in the same room is the best way to play ibb and obb, it is true that most people expect online multiplayer in a Playstation Network game.

So we’ve decided to change our release plan and to add online multiplayer at launch. Technically this is a lot of extra work. Creating a smooth online experience is not the easiest of tasks. It will take some time to get this right. The next few weeks we’ll start our first online tests, based on this we’ll be able to better predict when all will be ready. Right now we think it’ll be spring.

The waiting will be still a bit longer, but we think it is the right thing to do now.

With this announcment, are you more excited to pick up this game, or check it out?