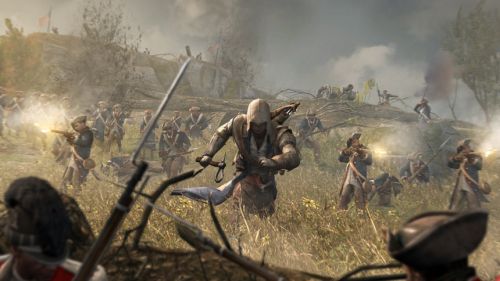 The blockbusters of the season must be coming out soon. There are a few quality games coming out this week, but a lot of them look like they're being pushed out ahead of the Halo 4 and Call of Duty: Black Ops 2 launches. If Hurricane Sandy hasn't shut down your power, you can enjoy these games this week. Stay safe people.

Assassin's Creed 3 (360, PS3, PC) This will be the first time the sneak and stab franchise supports cooperative play. It's also happening in America, so there's that. We'll review it and let you know if the co-op is a worthy mode or just another checkmark on the back of the box.  4 player online co-op

Ragnarok Odyssey (VITA) This action RPG boasts over 20,000 customization combinations, which is nice. It's so embarrassing to be caught wearing the same armor as someone else..  4 player online co-op

Toy Story Mania (Wii, 360, PS3) This motion controlled game is based on the films as well as the Disney 4D attraction. It's a mini-game collection that focuses on shooting galleries. Gotta keep the kids happy, right? 4 player local co-op

Wreck-It Ralph: The Video Game (Wii) The video game based on a movie based on video games is coming only to Nintendo systems. And only the Wii version has co-op. Tragic. 2 player local co-op

Painkiller Hell & Damnation (PC) There's a stake gun, which sadly has nothing to do with steak. We've got a Co-Op Review right here. 2 player online co-op

Blood Knights (XBLA,PSN,PC) Blood Knights was announced as a Halloween launch title and we haven't heard much about it since. Let's see what happens. 2 player local co-op

Here you will find the retail titles coming out this week. If we missed something please let us know in the comments section.