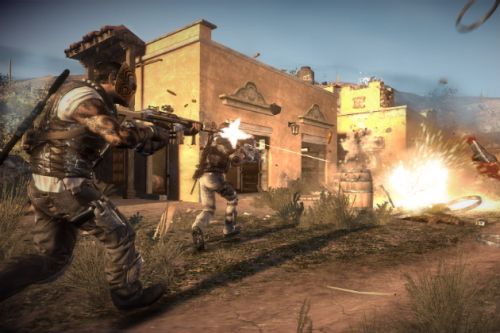 When Electronic Arts named their series Army of Two, they weren’t kidding around! The special mechanic in their upcoming title, Army of Two: The Devil’s Cartel, called “Overkill” can turn the tide of battle and put the hurt on enemies quicker than you can say “Gunzerker”.

Say you and your co-op a playing The Devil’s Cartel and the enemy has you pinned in a corner, but you’ve managed to fill your Overkill Gauge completely. Bring the fight back to them, guns blazing, with the ultimate co-op maneuver called “Overkill”. Once activated, both gamers playing as Alpha and Bravo become bullet spraying, grenade lobbing fiends of explosive destruction. Take a look two scenarios where both you and your co-op partner build up your Overkill Gauge to the maximum and see the carnage that ensues:

Sure, the enemies can still hurt you in this mode, but the two of you will be packing so much heat, who really cares what they’ve brought to the fight? On harder difficulties, building up to this mode will be essential, but otherwise it’s just for the pure awesomeness of the action itself. Work together with your partner to flank, team-shoot, and epically kill to build up that epic reward of Overkill!

Army of Two: The Devil’s Cartel will release on the Xbox 360 and PlayStation 3 on March 26th.