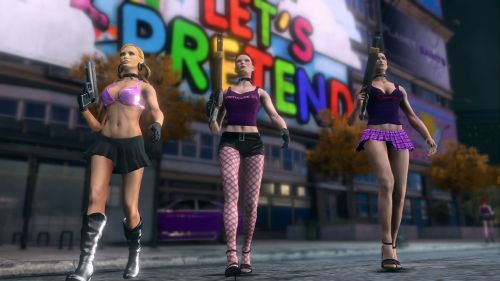 Saints Row: The Third will be getting a compilation edition next week. "The Full Package" version of the game will feature all of the DLC that has come out for the open world mayhem simulator thus far. Saints Row: The Third was an insane romp of violent debauchery, made all the more enjoyable with two player online co-op.

Check out the new trailer to see some of the massive action. Warning: Awkward foul language. It's as if the  nice young lady presenting the game just learned her first curse words. And then there's the actual game content. This includes people getting run over by cars, getting shot, and just exploding in general. Plus barely covered digital boobs.  Enjoy.

"The more you Row?" What the...? What happened to "Strap it on?" I hope next year they go all the way and use the tagline, "Put it in you!" Anyway, the game is fun.

Saints Row: The Third - The Full Package smacks retail store shelves in the face on November 6. It will appear on the PC, 360, and PS3  for $50.