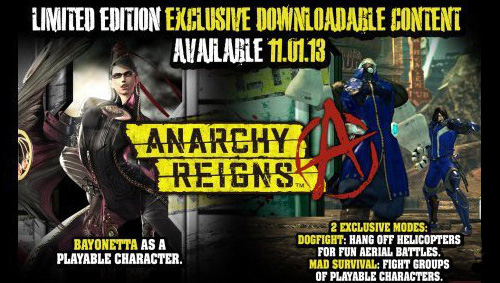 Anarchy Reigns just keeps getting better and better. Today Sega announced Limited Edition copies of the game will come with Day One DLC. The bonus for pre-ordering the game nets fans Bayonetta as a playable character as well as two new mulitplayer game modes.
A Sega beat em up wouldn't be complete without Bayonetta in the stable and by pre-ordering the game grants access to the tall, sexy, leather-clad Amazonian. Based on the gameplay trailers we have already seen for Anarchy Reigns, she will probably use her hair to summon giant ethereal monstrosities to fight for her...again.
The Dogfight game mode is not what you think. Players take to the skies as they hang from helicopters, shooting each other to try and drop them to the ground. The specifics of the combat are still up in the air, but we can guarantee that Dogfight mode will be just as exciting as the ground combat. Heck, in the last trailer we saw characters power bomb a helicopter.
Mad Survival mode is what has us talking. Anarchy Reigns already featured a survival mode, but of course they wanted to go deeper. Instead of just having generic baddies to destroy this mode has the enemies take on the form of other playable characters in the game. This means that Bayonetta could be summoning her ponytail-dragon to use against you. Form a team of 3 to try and go toe-to-toe with the cast of Anarchy Reigns.
Anarchy Reigns is scheduled to release on January 8, 2013 and features 3 player co-op.