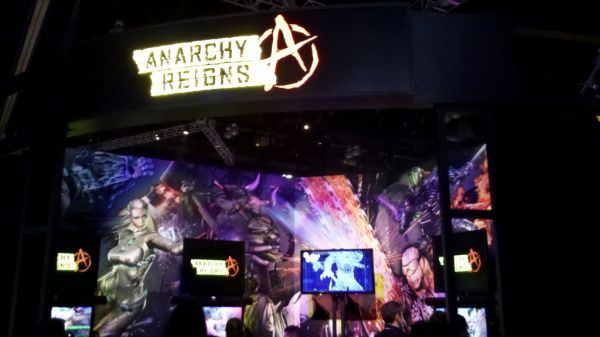 I had just finished my behind-closed-doors session of Binary Domain.  I was on my way out of Sega's massive E3 meeting room, when I suddenly felt as though I was forgetting something.  I looked around at the different cubicles, each adorned with different Sega icons and upcoming titles. Then it dawned on me:  I didn't see one of my most anticipated titles of E3 anywhere in the room.  I asked the gentleman at the front desk if I could see Anarchy Reigns.

"Hey man, if you made it in here, you can see whatever you want."  Excellent.

I was promptly ushered into a booth emblazoned with everyone's favorite blue hedgehog.  I was about to protest until I a saw a character select screen featuring some very un-Sonic faces.  A translator greeted me and introduced a handful of Japanese developers.  I will not do them the dishonor of misspelling their names here.  There were about four other members of the media already in place, so I quickly sat down and shut up.

The first thing I took note of was the character select screen.  The eight characters we've discussed in previous articles were there, along with slots for nine more.  If my math is correct, and it almost occasionally is, it looks as if there will be 17 playable characters.  That's a decent-sized roster for a new fighting game, if you could call Anarchy Reigns a fighting game.

We were treated to some cinematics and a few fight scenes between Jack and Leo, who will be the main characters.  There are two story lines in Anarchy Reigns, the Black Story, focusing on Jack, and the White  Story, which revolves around Leo.  The fight between Leo and Jack seemed fast and visceral, but then we saw a fight between Jack and the ninja Zero.  It was very repetitive, more Zero "clones' were continually spawned and destroyed.

After the demo I asked a few questions to see if I could feel out the co-op portion of the game.  They really wanted to cover the single player story, but I was (I admit, annoyingly) persistent.   I found out that there would be more than two or three players in a match, which didn't sound incredibly promising. The focus of the game would be versus multiplayer.  I asked about a Survival mode, since I posted a video featuring a Survival Mode back in April.  They remained stoic on the topic, repeating the game's focus on PvP.  Maybe they had chucked the co-op survival mode entirely.  After the BCD I wasn't horribly impressed with Anarchy Reigns.  It looked like an okay-ish fighting game.  I had to get down to the show floor and check it out myself.

I found the game on display tucked behind Sega's Binary Domain and House of the Dead: Overkill - Uncut displays.  Despite the hidden location there was still a line for the game.  I hate waiting in lines.  I especially hate waiting in lines for games that have abruptly fallen off my radar due to an apparent lack of co-op support.  But then I thought of all the starving orphans I'd be letting down if I didn't come back with full report of Anarchy Reigns' possibly non-existent co-op mode.

Picking up a vacated controller, I asked the gentleman with the Sega name badge a little about the game.

"What about co-op?" I prodded.

"There's a four player survival mode."   Ding-ding-ding!  We have a winner!  Was that so hard?

I chose Mad World's protagonist, Jack, and started the game.  There were four demo stations, pitting each of us against each other.  What I experienced was hard to follow, frantic, and fun.  I figured out how the lock-on worked and the battle instantly became easier to manage.  The game played like a 3rd person brawler, but instead of bad guy fodder, there are three other capable opponents vying for your demise.  The four of us went about trying to murder each other.  We smashed, chainsawed and sliced at one another.  You could see your opponents' health bar, so everyone kind of piranha'ed whoever had the lowest life.  If you died you simply respawned and jumped back into the fray.  I got the last kill, so I declared myself the winner. The game was an action-packed cluster of combinations and super moves hampered by an unreliable camera and a noticeable lack of polish.  Overall, it was a fun experience.  There's plenty of time to work out any issues before the expected release in January 2012.

On a side note, I checked, and as of now there is no local multiplayer, co-op or versus.

The genre of Anarchy Reigns has been hard to pin down ever since it was first announced as "Max Anarchy" back in January.  Producer Atsushi Inaba, whom I now know was sitting across form me at the BCD, initially touted the game as a  "Massively Multiplayer Melee Fighting Action" title.  While I wouldn't say "massive," for  better or worse, that's exactly what it appears to be.