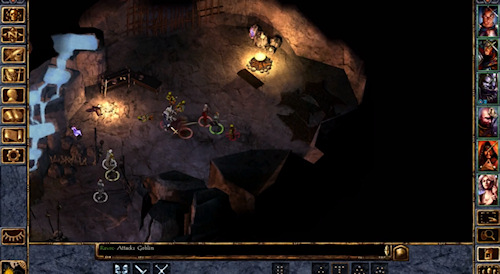 Baldur's Gate: Enhanced Edition will be hitting iOS and PC tomorrow, bringing with it a version of Baldur's Gate that has gotten a ton of polish and even some new content.  The game was delayed a few months to polish up some of its own issues, which is a good thing, but it's finally time to unleash the game on a new generation of gamers.

The classic Bioware RPG, which was released in 1998, is still considered by some to be one of the greatest RPGs ever.  It's loaded with hours upon hours of content - with most people taking around 40 to 50 hours to complete the game.  The NPCs are definitely a highlight, but the deep Dungeon and Dragons rule set integration is the real hook here.

Of course the best thing about the game is the online co-op multiplayer for up to 6 people.  While the original game allowed the same, it wasn't always the easiest to make happen, especially with dial-up being the norm in 1998.

The latest trailer showcases the enhanced interface, tweaked graphics and sounds, and plenty of combat to remind you that you'll be hitting the space bar (or pause button on iPad) quite often to tweak your combat mid action.  An Android version of the game is on the way as well, but there's no date yet for that launch.

We'll have our review up of Baldur's Gate: Enhanced Edition sometime next week.