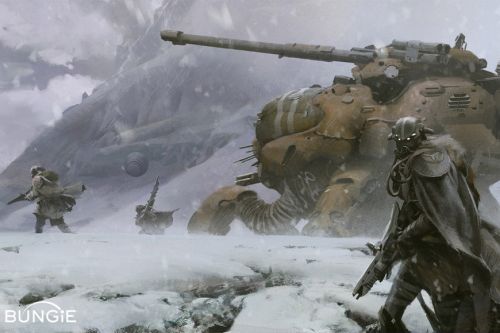 Bungie seems to be having a tough time keeping the lid on their upcoming project code named Destiny.  After some details leaked from an internal demo a few weeks back, we now have actual concept art, story, and more leaked via a marketing firm.  Instead of denying or downplaying the leak, Bungie actually went and confirmed it and released their own concept art image on their site to match the ones that IGN received via the leak.

The images showcase a game with a sci-fi edge with just a flair of fantasy and a dash of cyberpunk.  Here are the plot details provided in the leaked document.

Our story begins seven hundred years from now in the Last City on Earth, in a Solar System littered with the ruins of man's Golden Age. A massive, mysterious alien ship hangs overhead like a second Moon. No one knows where it came from or what it's here for, but only that it's our protector. Meanwhile, strange, alien monsters creep in from the edge of the universe, determined to take Earth and the Last City. We are young ‘knights' tasked with defending the remains of humanity, discovering the source of these monsters and — eventually — overcoming it.

The plot details come from a marketing document that put the game on both the Xbox 360 and PlayStation 3, along with future games in the franchise slated to come to the Next Xbox and PlayStation 4.

Bungie has officially stated they aren't quite ready to take the wraps off the project yet, but that more details will be coming "soon."  Our guess is to keep an eye on a future Game Informer issue, which is the most likely place for a full reveal.

Destiny is Bungie's first game outside of Halo in over 10 years and their first game since breaking with Microsoft and signing a publishing deal with Activision.  Their original game outside of the Halo universe was 2001's Oni, which was created by Bungie West.  We'll keep you posted on further details of Destiny as they happen.