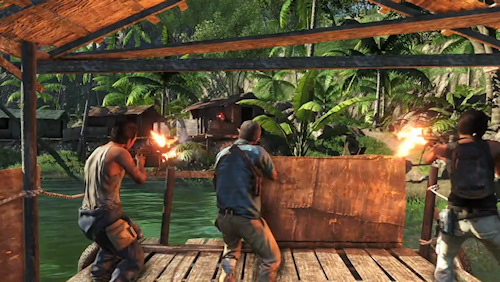 FarCry 3 is out next week on the Xbox 360, PlayStation 3 and PC.  The game was a surprise for us at E3 earlier this year when it boasted an entirely new co-op campaign along side the game's single player campaign.  While details have been scarce, today's trailer reveals the mode's four playable characters as well as some of the story.

The trailer is narrated by Callum, described only as a Scottish thug, he appears to be the leader of a group that consists of an ex-cops, a russian mobster, and an ex-military type.  Yeah, this is basically the A-Team in a tropical paradise filled with incredibly bad language and quick one liners.  I've never heard anyone utter the phrase - "stick together like a nuns legs" to emphasize teamwork in a co-op game, but that's a thing now.

One thing to note is the trailer mentions the game's split-screen co-op mode is only available on the 360 and PlayStation 3 - though in our Q&A earlier this year with the game's producer, we were told the PC would also have split-screen support.  We'll try to nail this down before release.