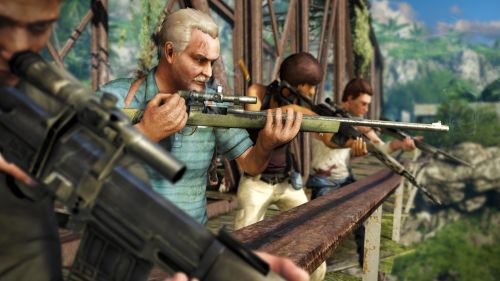 Heads up gamers. See that crew of snipers from Far Cry 3's co-op mode up there? I wonder what Leonard, Tisha, Mikhail and Callum are shooting at... Could it be Xbox 360 and PC co-op aficionados? Maybe. You see, Ubisoft Massive will be launching a DLC co-op pack in January, which is awesome. But it's exclusive to the PS3 version of the game, which is lame. (Unless you pick up Far Cry 3 on the PS3, then it's still awesome.)

The new co-op DLC is called "High Tides" and it will add two new chapters to the cooperative campaign. These new missions, called "Jailbreak" and "Redemption," will pick up right where the co-operative story left off. According to the PlayStationBlog post the DLC will include "...new missions, tougher fights, bigger competitions, some great up-close time with your favorite characters, and explosive moments unlike anything you’ve seen before." That sounds great. It also sounds like we won't get a real ending to the Far Cry 3 co-op campaign until January. I hope it's a timed exclusive, or 360 and PC owners will never know what happens. Since everyone I know has already picked up the game on the 360 or PC, I'm kind of locked in. It's a shame we will be missing out in January. Sad faces all around.