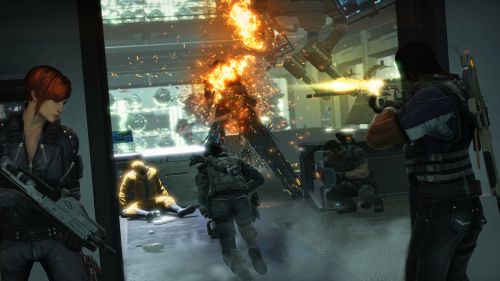 Remember when Overstrike was announced, and everyone was like, "Coooooooool?" Then remember when it became Fuse, and everyone simultaneously lost interest? Remember how it got worse when the box art was revealed, and each character's head was bizarrely cropped out, literally making the four playable characters little more than faceless soldiers clad in generic battle armor? Yeah. That was a bummer. Despite those missteps, Fuse still looks pretty damn good in action, and that's what really matters.

Today we have a video featuring Overstrike 9's team leader, Dalton, dishing the dirt on his own personal "rules." You see, he's been in the shooting-people-for-a-living business for quite some time, and you don't become the leader of Overstrike frick'n number 9 unless you have a few awesome rules. The last time I saw a guy named Dalton talking about "rules" I was watching Roadhouse, and we all know that is one of the greatest pieces of cinema ever made. I have high hopes for you, Dalton Brooks. Don't mess this up.

Not bad, Mr. Brooks. Swayze did it better (NSFW language), but he had the help of god-like 80's hair. Still, not bad. Looks like the writers of Fuse have a pretty good sense of humor. Four player co-op with specialized weapons and class-based agents, plus some wisecracks? I should be done with Borderlands 2 by the time this comes out next year. I'm in.

Fuse supports two player local co-op, four player online co-op, and combo co-op. It should be out on the Xbox 360 and PlayStation 3 some time next March.