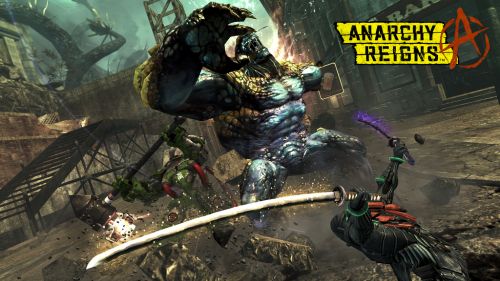 Anarchy Reigns dropped in North America yesterday. The online multiplayer brawler has been out in Japan since last July, but it's new to most of us. I played a few hours (okay, several hours) with some of the Co-Optimus staff last night and we had a damn good time.

There was a little too much maniacal giggling coming through my headset as we thunder-punched  our way through grunts, musclebound cyborgs, and giant mutants. We explored the game's Survival Mode, which is made specifically for co-op. We also tweaked some of the other match types, creating private lobbies where four of us could tangle with the enemy AI. We'll have a full Co-Op Review up soon. For now, I offer you the Anarchy Reigns International launch trailer. It makes the game look good, but it's not nearly as badass as the Japanese launch trailer that came out last May. I included that beauty as well.

Similar to Earth Defense Force 2017 Portable, the Japanese trailer is better. It covers the many different match types, the wide variety of characters, and touches on the ridiculous story. Sure, the trailer is in Japanes, but it also speaks to us on another level: the universal language of a good old fashioned beatdown --with missiles. And monsters.