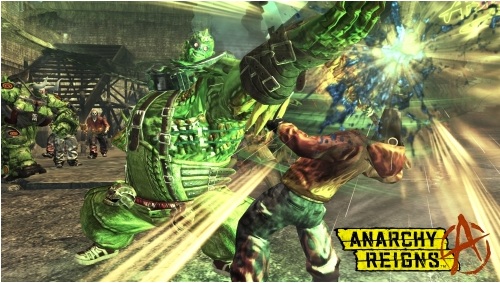 Two new characters have joined the roster of Anarchy Reigns.  A few days ago we brought you the Durga video.  It featured a tiger man with a revolver cannon leg.  I'm not kidding.  The next two guys are even more bizarre.  First we have Oinkie.  He's a giant pig man who knows Kung Fu.  I'm still not kidding.  In fact, I'm just getting started.  Wait until you see Oinkie after he juices up.  Once he's properly 'roided he turns into the love child of Killer Croc, Bane, and bacon.  Following that we have Garuda, who looks like a Robotech mech that drunkenly stumbled into the wrong damn game.  Upon getting his bearings he just said "Screw it" and started killing up everything he saw.  There's even a "Hide your wife" reference in his video.  This game gets more insane everyday.  I can't wait to see where they go from here.

Anarchy Reigns will be out in January on the the Xbox 360 and Playstation 3.  It supports four player online co-op.