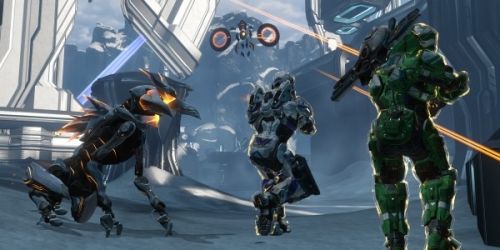 Halo 4's Spartan Ops mode has been on a re-run schedule since December, with 343 opting to put the game's earlier episodes into match making.  During that time they've been running a contest giving gamers a chance to win things like a Truck and a spot in an upcoming Halo game.  As the tournament begins to wind down it's about time for some fresh co-op content.

Week of 1/21
Spartan Ops Episode 6: Five new missions and an accompanying new CG cinematic.  "Forge Test" playlist (name not final): A rotational hopper featuring small Forge maps such as Relay. Help us test these maps by providing feedback and reporting bugs that will assist us in getting them ready for Matchmaking!
Specializations: Pioneer and Pathfinder Specializations unlocked for all players.

Week of 2/4
Spartan Ops Episode 8: Five new missions and an accompanying new CG cinematic. Team Doubles playlist: A rotational hopper for those of you that like action of the 2 vs 2 variety. Specializations: Rogue and Tracker Specializations unlocked for all players.

There's still two episodes left to go then, but those dates are unannounced.

In late February Halo 4 will also get some more DLC with the Majestic Map Pack, which includes three new maps.