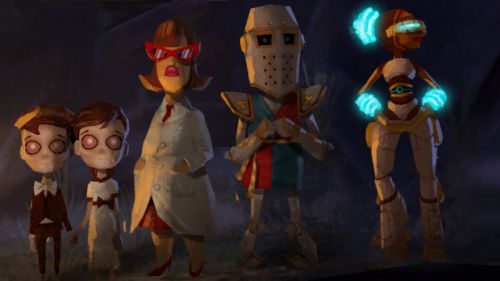 One week from now, gamers will be able to purchase Sega and Double Fine’s latest title, The Cave, through online stores. It might not be the biggest title this year, but it should pack quite the adventure for co-op players out there.

From Ron Gilbert, the maker of Monkey Island and Maniac Mansion, and Double Fine Productions, The Cave is a solid co-op puzzle adventure that allows up to 3 players to assemble a team of three characters (some more straightforward and others more mysterious) to traverse the depths of this underground labyrinth. Each adventurer has their own unique personality, backstory, and ultimate goal, along with different sets of abilities that help to overcome the many obstacles they will face. Only working together as one can they succeed!

Beginning on January 22nd, The Cave will first arrive on PSN and Nintendo Wii U eShop both for $15. Xbox 360 and Steam users can look to grab it the following day, January 23rd, for 1200 Microsoft Points on Xbox and $15 on Steam.

In case you haven’t read it, The Cave was named GameInformer’s Best Adventure Game of E3 2012, so we  highly recommend this as a “must try out at least once” type of game. We’ve already shown great interest in this title, giving our impressions of what we’ve seen so far to our readers. If you haven’t read our impressions articles yet, do check them out now!