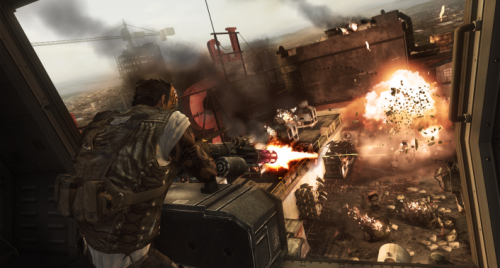 Army of Two: The Devil's Cartel is just a few months away. Today we have a new video featuring not-Salem and not-Rios looking and sounding an awful lot like Salem and Rios. Like the previous Army of Two titles, the game is built around cooperative game play. Flanking your enemies while your partner draws fire is the name of the game. The first two games were a lot of fun with a friend --solo, not so much.

The trailer features plenty of gun play punctuated by some good old fashioned machismo. There's also some dude who is apparently bullet proof. Cool. I could get into a Terminator/Army of Two crossover. Sadly, I don't think that's what's going on here. Check out the video and taste the explosions.

Seriously, guys. I may not be a hardened mercenary, but I'll offer these words of advice; if big, bad, machete-wielding dude is marching towards you, sans cover, why don't you take a cue from Indian Jones and just go ahead and shoot him. You can thank me later.

Army of Two: The Devil's Cartel supports two player local co-op and two player online co-op. It will be out on March 26 on the Xbox 360 and PlayStation 3.