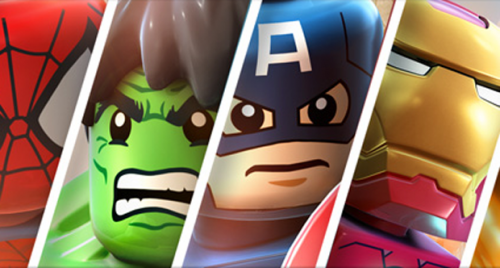 It came as little surprise when two new Lego games were announced this month for a 2013 release. Perhaps a little more surprising is that one of those games, LEGO Marvel Super Heroes, is delving into some new IP for developer TT Games; one that has seen a lot of popularity due to recent movie releases and more. If there's one developer that could be trusted to create a light-hearted/fun romp through the world of Marvel, it's certainly them. Afterall, TT Games stepped things up with LEGO Batman 2: DC Super Heroes, so this game can only improve from there, right?

Anyways, jumping back to the less surprising side of things, it's been confirmed via an interview with GameInformer that LEGO Marvel Super Heroes will continue the two player local co-op tradition. We didn't have any concrete information at the time of the games' announcement that it would include it, but it seemed likely given the developer's track record.

That track record, actually, has some history to it that's revealed in the interview with TT Games' studio head, Jonathan Smith. Cooperative gameplay, and the familiar "Freeplay" mode, have been key features since the very first game, LEGO Star Wars, and were seen as part of LEGO's "social" legacy.

From the GameInformer interview:

That multiplayer focus has been in the games since the first of TT Games’ Lego games, Lego Star Wars: The Video Game, was conceived. Studio head Jonathan Smith recalls the first pitch to Lucasarts, where co-op was just one of several gameplay features that the IP holder had to wrap their minds around – particularly in one of the game’s sillier modes.

“We’re actually okay with your crazier ideas about having this thing called Freeplay, where you can take this one character from a movie, even if they’re dead, and play them in another movie,” Smith recalls Lucasarts’ response. “You can take Darth Maul and put him into Episode III. And, we’ll let you have offline co-op as well, so two players can do this together. So in Freeplay, yeah, you can have General Grievous with General Grievous against General Grievous. You can have that."

They go on further to discuss the Freeplay mode and how it ties in with the whole "Social Play" aspect of LEGOs; that is, you generally play LEGOs with others however you want. There's creative freedom. It's something I hadn't ever really considered before when playing some of these games with family members, both younger and older, though I know it's the one aspect that keeps me playing and not getting bored.

It's a great interview that's worth a full read, covering the inspiration they got from arcade games and how the local co-op mode has evolved over the many iterations.

No firm release date yet for LEGO Marvel Super Heroes, though the latest word is that we should see it some time this fall.