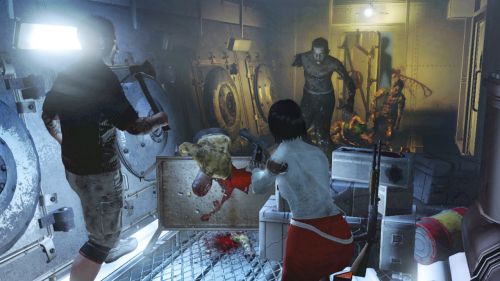 Last fall, at PAX Prime, we got a chance to see some new footage from Dead Island Riptide. This is the sequel to the totally swell co-op zombie grinder, Dead Island. We were presented with a new gameplay feature, the hub defense mission. These missions will focus on co-op teams defending an area from waves of zombies until some sort of timed objective is met.

It was a pretty cool concept, bringing that whole Night of the Living Dead, trapped-behind-a-barricade vibe. Instead of a broken down old farm house you'll be playing in a lush, flooded jungle. At least for this particular mission. Now you can see how it all plays out in the following video.

These hub defense missions seem to focus on firepower and explosions, two of my favorite flavors of mayhem. There's also plenty of close quarters melee combat, which is also nice. I really hope we get bayonets this time around. Check that --electrified, burning, poisonous, bayonets. Yeah. That's the ticket.

Dead Island Riptide will support four player online co-op. It will launch on April 4 for the Xbox 360, PlayStation 3 and PC.