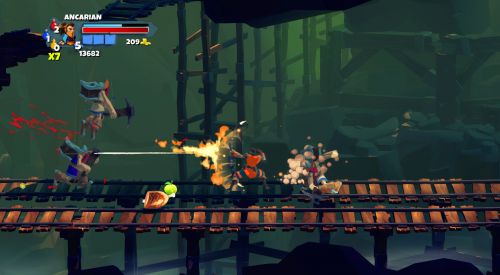 Sacred Citadel will be hitting the digital markets later this year. It's a cooperative side scrolling brawler set in the Sacred universe you know and love, and it will act as a prequel to events in the much anticipated Sacred 3. We got our hands on Sacred Citadel a few months ago at PAX. We had a good time slaughtering our enemies as we engaged in three player local co-op. If you're familiar with Golden Axe, you get the idea. Sacred Citadel is one of those games that looks much better in motion. Screenshots don't really do it justice.

Which is why today we have two videos, the first will give you a glimpse of the Ancarian Ranger. He's a ranged attack specialist who wields an over-sized bow and uses deadly katanas for up close and personal encounters. The second video shows off the Khukuri Shaman's skills. She has an enchanted drum and a kick ass magic wand  which can absolutely wreck her enemies. I played as the wily Shaman at PAX. She's got some impressive moves, for a wizard. Oh, and everyone can ride dinosaurs, because they're awesome.

You'll also see the Safiri Warrior in action. You can see his video featurette here.

Sacred Citadel supports thee player local co-op and three player online co-op. It will be available to download later this year from the XBLA, PSN, and PC.