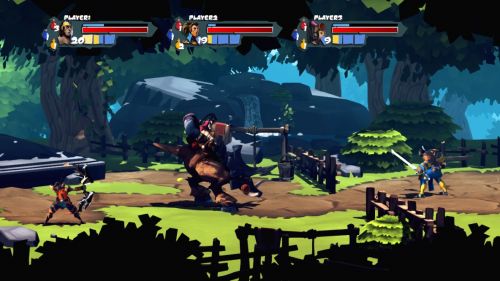 I think we can all agree the world needs more side-scrolling brawlers. Nick and I recently played through the arcade classic, Golden Axe, for our regular "This Week In Co-op" column. We had a lot of fun, but something was a little off... oh yeah, it was the eye-ravaging graphics. I would like to get my old-school brawl on, but I don't want to do irrepreable harm to my vision. Whatever will I do? Play some Sacred Citadel, that's what!

Deep Silver (publishers of cooperative powerhouse Dead Island) and Southend Intractive (the developers of ilomilo) have announced the next chapter in the Sacred franchise: Sacred Citadel. This is NOT Sacred 3. (Don't fret, that's still under development.) Sacred Citadel is a side-scrolling beat'em up which is a stand-alone title in the Sacred universe.

The announcement trailer is light on story, but heavy on action and features. Just the way I like it. Take a look.

Yeah, that's right. The game will support three player online co-op. Here's a tidbit from the press release for those of you who like to know why you're fighting.

Three warriors unite against an evil that threatens to enslave the once peaceful world of Ancaria. Lord Zane’s Ashen Empire has created an army of Grimmocs, modified Orc henchmen at war with the Seraphim. Only when these heroes unite and use their skills to support each other they will stand a chance!

Classes will include the Safiri Warrior, Ancarian Ranger, and Khukur Shaman. Sounds like the classic melee, ranged, and magic crew. Characters will have different skill sets which can be enhanced through RPG elements and items. Each player will be a dual-wielding, double-jumping, monster-riding bad-ass.

Sacred Citadel will act as a prologue to Sacred 3. It will feature three player drop-in/drop-out online co-op. We expect it to launch in 2013.