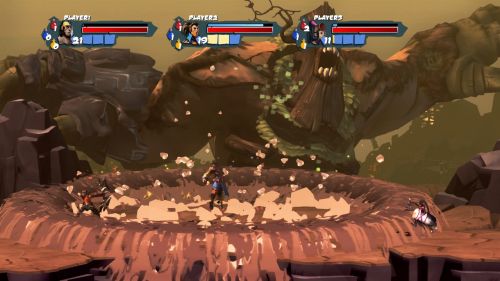 The Deep Silver booth was tucked away on an upper level of PAX 2012. Sacred 3 and Dead Island Riptide were the highlights of the display, but convention goers waiting for those video demonstrations could get some valuable hands-on time with Sacred Citadel, a game that caught my eye a few weeks ago.

As you may know, I'm a big Golden Axe fan. I like those old school, side-scrolling brawlers. Sacred Citadel isn't seeking to redefine the genre, it revels in it. Mike, Nick, and I got a chance to play through a level. They played as the burly Warrior and speedy Ranger, while I played as the female Shaman. I do love the ladies.

Sacred Citadel is a fast, brightly colored brawler with RPG elements. The controls are tight and responsive, which allowed me to quickly engage enemy characters. The three of us moved through the battlefield easily with ordinary button smashing. A few d-pad movements combined with button taps resulted in devastating power moves. It wasn't very difficult, but in a demo, it's not supposed to be. In addition to the power moves there were monstrous mounts that we could ride. These bipedal saurians tossed enemies into the air with ease. I was thankful for the overhead player indicators when the action ramped up. It was easy to get lost in the chaos of flying bodies, trampling creatures, and flashy finishing moves.. Sacred Citadel is a prologue of sorts for the upcoming action RPG, Sacred 3. While the two titles are completely different as far as gameplay is concerned, they both take place in the same universe. Obviously, bearing the Sacred name you'd hope there would be some sort of RPG-like elements. We were told to expect towns between levels, allowing us to buy and upgrade weapons, leveling abilities to increase our character's power, and some light loot gathering elements.  We didn't get to see any of this in the demo, unfortunately.

Sacred Citadel supports three player drop-in/drop out co-op, either locally or online. We could not get a confirmation on combo co-op. We pretty much just smashed buttons and killed dudes. The gameplay was simple, but satisfying. Sacred Citadel will be available for download for PC, XBLA, and PSN in 2013.