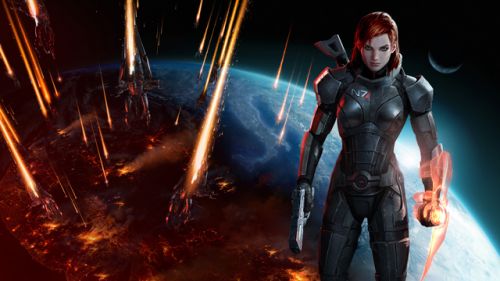 Mass Effect 3 fans, rejoice! There is a new cooperative DLC coming to Mass Effect 3 very soon, according to the Bioware Social Forums. The final installment  of multiplayer content, which is named "Reckoning," will be released on February 26th for Xbox 360, PC, and Playstation 3. As of now, there is no mention of a Wii U version. Like all of the cooperative content, this one will be free to download.

Reckoning will add a slew of new content to the cooperative portion of Mass Effect 3. Usual things will be added, such as characters, maps, and weapons. New classes will include the Geth Juggernaut, Female Turian Raptor, Talon Mercenary, Alliance Infiltration Unit, and more. The screenshot below shows use of the new weapon called the Biotic Hammer, which will add a fun melee weapon to the fray. To sufficiently hype you up for the new content release, Bioware will be hosting a live stream of Reckoning via Twitch TV on February 25th at 9:30 am PST. During the stream, members from the development team for Mass Effect will show off the new content and answer questions from the community.

It also bears mentioning that the final single-player DLC for Mass Effect 3, titled "Citadel," will be released on March 5th. "Citadel" sounds like one of the biggest add-on content packs for a Mass Effect game yet, weighing in at 4 GB of data, and taking two download installments for the Xbox 360. It will focus on the Citadel of course, and will feature a new hub area to explore even upon completion of the content.

In case you are unfamiliar with the cooperative aspect of Mass Effect 3, it features up to four players online co-op in a special dedicated mode. Players can team up to fight waves of enemies, upgrading characters and gear along the way. As you fight through the hordes, your Galactic Readiness rating increases, which will affect the single-player portion of the game. Look for "Reckoning" to drop on February 26th for Xbox 360, Playstation 3, and PC. Edit: It appears there will be no new maps added with "Reckoning." Apologies for the confusion!