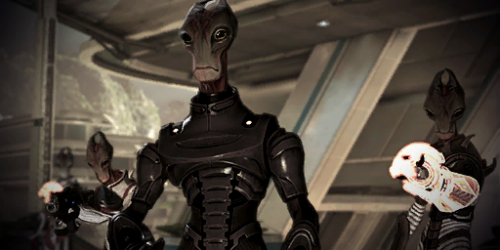 I was skeptikcal Bioware announced that Mass Effect 3 was going to have a co-op mode. As information trickled out to the masses, I drew conclusions that it was going to be a tacked-on horde mode rip-off that was added to the game in order to fill a checkbox requirement. I was being selfish, I didn’t want anything to sour my experience thus far in my wonderful space opera that I have been journeying through for the past five years. Having the Galactic Readiness level correlate to your multiplayer progress and allowing it to alter your single player ending was an ingenious way to force me to dip into the multiplayer even before I had finished the game. Well played Bioware, well played.

I have played more hours in the multiplayer mode of Mass Effect 3 than it took me to finish the single player campaign.

This is shocking to me and I felt needed to be shared with the community. I honestly did not expect anything from Mass Effect 3's four player online co-op, but Bioware has managed to make one of the most addicting multiplayer modes I have played in months. The Gears of War 3 DLC came out on Tuesday and I didn’t even blink, as I kept on blowing away waves of Cerberus, Geth, and Reaper forces. In the latest session I filled in the 4th slot of a group that I regularly play with; all of us are about the same skill level and in a similar mindset. We had high level characters, averaging around 17 (with 20 being the max) and my current go to character is a Salarian Engineer name Saulery (clever I know). His role is to toss out decoys to distract the enemies while he uses his Omni-Tool to break down the shields and incinerate armor. A true support character and one that I have become very fond of since I usually do not play as a support party member. We decided to challenge ourselves and try the silver difficulty setting. Bronze was getting too easy, Gold is too difficult unless you have invested large amounts of time or Microsoft points to buy crates. Off we went into space to take on a Silver wave of Cerberus mercenaries.

I won’t go into a ton of detail on the actual events that went down, since you can view the playthrough in the video below. I will say that playing on Silver was big challenge and makes Bronze look like a walk in the park. We had to rely on making sure that each character was fulfilling their respective role in tearing down defenses, blocking off areas, and doing the actual killing. When faced with a large amount of enemies, you quickly figure out that teamwork is necessary or you are going to get wiped. In one situation that stood out in my mind, we were backed into a corner while trying to hack a device. A relentless onslaught of Cerberus forces had us pinned down behind cover with one of our allies out in the open and dying quickly. We all knew what needed to be done so with a quick decoy I managed to get the enemies’ attention which included an Atlas mech and several Phantoms (*note: these are things that will mess you up). While my decoy was being a sexy distraction a flurry of biotic powers went out from our adept, and finally our sentinel popped his tech armor to go in and rescue our buddy. It is moments like these that really shine in the multiplayer of Mass Effect 3 and make for an engaging co-op experience. The Resurgence pack DLC will not help my addiction.

Before I finish I must apologize. I went into the Mass Effect 3 multiplayer with low expectations, and did not expect much. I can’t put my finger on exactly what it is that I love about the co-op, but it has managed to take the role as my main co-op game since its release. Maybe it is the satisfaction of playing the crate lottery - buying loot with your hard earned credits in hopes that you unlock that awesome weapon or character class you were hoping for. It could be that you can play a co-op session in less than 20 minutes, making for a nice bite sized game that does not have an overbearing time commitment. I think Bioware took what works in a wave based survival mode and added on some interesting pieces, mainly the rpg elements. Allowing the player to experiment with different classes and the bonus of being able to play as the many races that fill the Mass Effect galaxy grants you a sense of ownership over your character.  I love tinkering with the different skills, weapons, and equipment to create a different loadout that allows me to play totally differently from game to game.

The DLC pack that hit yesterday is not going to help my gambling addiction. New classes, races, weapons and maps injected another shot of gaming heroin straight into my veins. I will proudly admit that I have yet to purchase anything using real world money however I make no promises in my attempts to save the galaxy. Be sure to read the co-op review for more Mass Effect 3 tales, and hop into some co-op multiplayer as soon as you can because it is one of the best co-op games I have played this year.