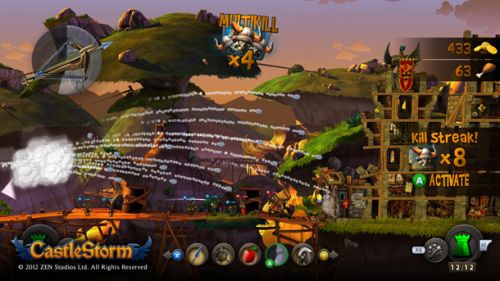 Ready your artillery, because CastleStorm is rapidly approaching its projected spring Xbox LIVE Arcade release. Zen Studios has revealed the specifics of its co-op modes for those looking to try to defend their castles from hordes of man and beasts.

Along with its single-player components, CastleStorm will feature three multiplayer and co-op modes, all playable in either online multiplayer or local split-screen. Players will be able to use their own, unique castles that are created through the “Castle Editor” feature to do battle with each other. Both the multiplayer and co-op modes will net players experience points to level up and obtain new structures and weaponry for their castle’s defenses (leveling up here is different from doing so in the single-player mode). Let’s take a look at each of the three modes:

1 vs. 1 split-screen mode: Simply try and beat your opponent by bashing in their castle. Choose your side (the noble Knights or the ragtag Vikings) and then choose your arsenal of weapons wisely. Face off, castle to castle and the first to completely demolish his or her opponent’s castle wins!

Survival Co-op: Two players team up to fight off waves of enemies together! Assign one player to control the ballista and the other to control ground forces. Good timing and great aim are essential in Survival Co-op as friendly fire could be harmful to your own troops on the ground.

Last Stand Co-op mode: Would you rather ditch the castle and do some hand-to-hand combat out in the battlefield? Check out the Last Stand Co-op mode where both players control a hero and battle wave after wave of enemies together! The object is to stay alive as long as you can, but remember, enemies can come from either side so be ready.

No announcement has been made as to CastleStorm’s exact release date. In the meantime, we can take a quick look at some of CastleStorm’s multiplayer and Survival Co-op gameplay through the trailer below: