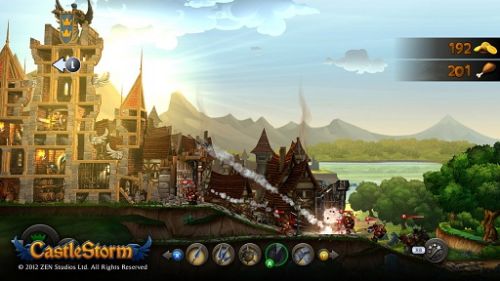 Great Britain has lots of castles.  In fact, we have too many of them and could do with some being attacked and destroyed in a Ye Olde Fashion.  People of a destructive nature will be able to brush up on their siege skills with the upcoming downloadable title CastleStorm.  I would help bring down a fort or two, but I actually like the shops around Windsor Castle, so these new screens will have to do.

CastleStorm is planned for a late 2012 release and will have a survival style co-op mode were 2 local players can work together to last as long as they can against the approaching horde.  So far the only platform officially announced is XBLA, but Zen Studios are promising that other download platforms will also get the game.

If these new screenshots have piqued your interest in the game, Zen have also released some new Wallpapers for your desktop.